Willie Mays - One of Baseball's Greatest 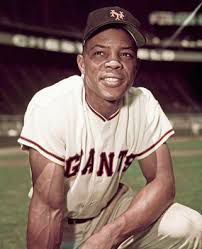 Willie Mays, born William Howard Mays, Junior on May 6, 1931 in Westfield, Alabama, was named baseball's second-best player of the century, in step only behind Babe Ruth. He was awarded 12 golden glove awards, two MVP awards, Rookie of the year, and holds the record of most hits in the All-Star games with 23, having played in 24 games. But how does a man who starts in such humble beginnings become one of baseball's greatest players of all-time? Hard work, determination, and a great love of the game.

Willie Mays has lived a very private life and shunned the idea of giving interviews or allowing anyone to write stories about him. He didn't like the idea of someone making him more or less than what he was. In light of praise, Willie once said, "I don't make history. I catch fly balls.” Not unlike many of the players of the day, Willie he was born to a poor family in poor circumstances. Willie's parents were young and unwed. His 18-year-old father worked part-time as a porter on the train and played in the industrial league during the baseball season, and so was gone much of the time. His 16-year-old mother found raising the boy on her own, more than she could handle. She gave up his care to her two younger sisters and left to marry another man whom she later had 10 children with. Willie always felt on the outside of this family, although his mother lived only a mile away and continued to play a role in his life until her early death. Because of his feelings of abandonment, Willie did not like to discuss this sensitive issue of his childhood and much of his early years were unknown until later in his life. A very persistent author convinced him that the story would be written eventually and it would be best if he was around to have an opinion about it. Willie has since shared his deep feelings of respect for his mother and all she did for him. Here are some business lessons we can learn from Willie Mays.

As a black player, the odds were against Willie Mays to be admitted to the major leagues as a professional baseball player. Willie worked hard despite the odds starting at the young age of six months old when his father first placed a baseball in his hands. As a young boy he diligently practiced baseball often with the other neighborhood children even though he knew those games would often be interrupted by the police. While team after team in the major leagues denied him a position as a professional player, he did not slack off. Rather, he persevered in working hard on the field by playing in the black industrial league. The hard work didn’t stop there though. It continued when he landed a spot on the New York Giant’s team. As a black player in a predominantly white league, Willie had to exert much more effort into playing the game with precision and accuracy than the other players, because he had to prove himself to many of his prejudice teammates. Even after retirement, Willie continued to work as a consultant to help other players achieve similar success as he did.

Baseball served as a refuge from his mother’s abandonment, which while the circumstances were unfortunate, the result of that abandonment was an intense determination to succeed at the game. Willie’s father William Sr. introduced him to America’s favorite pastime as a baby. He fostered Willie’s determination by coaching him through the game and supporting his budding career as a professional athlete. At one point Willie suffered a serious arm injury, but his determination lead him to throw an even stronger pitch upon healing. He was so focused on doing well that he threw so hard he passed out on the field after playing a long game. Willie’s father encouraged him to change his position from pitcher to a center fielder. Willie followed his father’s advice and exceled at his new position just as much or even more than he did at his former position as a pitcher. This determination to succeed eventually led him to play for the New York Giants.

Since Willie’s mother abandoned him, his father played a pivotal role in his life. Baseball was a hobby they shared. Symbolically, baseball was the glue that solidified their father/son relationship. Due to the sentimental feelings Willie had for baseball, he demonstrated passion when it came to playing the game. He simply loved to play the game. While those frequent neighborhood games helped Willie acquire the necessary skills to become a professional player, that was not his main motivation to play those neighborhood games. His main motivation to play those games was the excitement he felt as the ball left his bat and he ran the bases. His experience playing baseball was so fond that he continued to help other professional players when the time came that he had to retire.

William Sr. instilled the importance of maintaining good health by teaching him the harmful effects of drugs and alcohol to the body. Upon catching Willie drinking alcohol at the young age of eleven, William Sr. had Willie inhale a puff of a cigar. When Willie started coughing uncontrollably he handed him a glass of hard liquor that made Willie even sicker. Through this hands on lesson, Willie experienced the ill effects drugs and alcohol have on the body. After his father taught him the benefit of good health when he was a boy, he never again drank alcohol or smoked tobacco, which helped him stay healthy enough to give it his all in every game. His health might be one of the main keys to his success as an athlete, because it kept him strong and alert.

The abandonment from his mother, paired with the lifetime of racial persecution that Willie faced, could have easily crushed his spirits, but alas they did not. Willie had a unique quality of optimism that helped him persevere through trying times and become one of America’s greatest baseball players of all times. When reflecting on the neighborhood baseball games that were disturbed by the police, Willie chose to remember how fun the games were instead of how angry and racist his adult neighbors were. He faced rejection from major league teams for years, but instead of feeling discouraged, he felt privileged to play on the black industrial league.

Under the torments of unending prejudice most men would crack, but that was not the case with Willie Mays. He chose to be the peacemaker among angry teammates. This quality of peacemaking that Willie exhibited brought unity to the team and helped them to play better as a whole. This peacemaking made waves on and off the field. Him helping the team work well together, reflected positively on his own career.

Willie Mays is a man known for putting on a good show. One of his signature moves was to wear an oversized hat to paint the audience’s perception that he was running faster than he really was. He also would jump over a player or trip himself to catch the ball precisely at the perfect moment. These techniques enthused the audience, which enhanced overall viewership of the New York Giants’ games.