Tom Brady - One of Football's Greatest 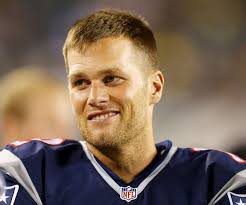 Deflategate has clearly taken up a lot of headlines this summer, but there are many business lessons we can learn from Tom Brady.

On December 23rd, 2013 Tom Brady showed the world an important trait a champion must have when he complimented Peyton Manning for his performance this season. Brady spoke to a sports analyst saying how hard it is to throw a touchdown pass let alone throw one after three neck surgeries. The ability to recognize others and praise their achievements is a sign of maturity, one of the first traits in becoming a business champion.

1) Praise the Achievements of Others

When Tom Brady praised Peyton Manning for his talents it showed not only Brady’s class, but the kind of person he is; it showed that Brady has the heart of a champion. This phrase may have many connotations with it, but what it comes down to is letting go of your ego, not feeling intimidated by others and having the ability to praise greatness when you see. Many people that are in the same field as other people will be hesitant to praise their competition. I mean, how often to do see Starbucks praising Tim Hortons for their cup of joe? Not often and it’s because they are immature with their feelings and how the consumers may come to understand their actions. I think if other businesses started praising each other than the United States will go through an era of peace never before seen. Imagine if Walmart praised Viacom for its great health benefits and competitive salary. Very soon there will be a new culture in America that speaks to the heart of champions and corporations will soon demand that their employees exhibit this same quality. But, if only that could happen, all problems will soon rectify in this country, anyway, I digress, but you get the point don’t you?

When you praise the achievements of others you are indirectly praising yourself in a way that doesn’t make you seem cocky or give you bad press. You are telling the world that this kind of person is what you admire and indirectly you have these same traits, or at the least you are trying to achieve this level. In business you can have no greater weapon in your arsenal than praise, especially if you direct that praise to your competitors. If you don’t quite believe me then the next time you’re at work try praising someone at your same level when they do something great. Now don’t go praising your boss or someone who is above you because you will be mistaken for a brownnoser, but if you say good job to a rival at work who you are in competition with for the promotion or raise then you will see the yourself be rewarded indirectly. Once you believe in the power of praise then start building your business and get to work.

Just as it’s important to give praise it can be said that learning to accept praise graciously with a simple nod and thank you is even more important. You may think this is insane, but roll with me for a second. Think about the times you ever praised someone, especially those at your level or who were you below you. Wasn’t it tough to say it? Didn’t you feel a little embarrassed? Perhaps you were blushing while you were saying, “Hey, that was a great job you did yesterday.” Well, if you felt this way then the person who is praising you may feel the same way

What you don’t want to do when accepting praise is make a big deal about it. Never say, “That’s right! I’m the best.” Or draw attention to the praiser. You also don’t want to scold the person for praising you by saying, “It’s about time you said something nice!” These kinds of reactions hurt the praiser’s ego and make them feel hurt, even spiteful at times. If you never want to receive praise from that person again then go ahead and scold them, but if you do then you better learn to smile and say, “Thank you.”

When you act in accordance with your mind you have what I call mind-body agreement. It’s when your body moves in accordance with your mind, ignoring all outside stimulus. A good example of mind-body disagreement is a mosquito bite. If you’ve ever been bitten by a mosquito you know how insanely difficult it is to not scratch it. Eventually, you continue scratching and scratching until blood comes out and now your arm hurts. Your body is in disagreement with your mind and even though it hurts you can’t stop because of the stimulus. When you learn to ignore all outside stimulus and only act according to your will then you will create an unbeatable mind-body agreement that can’t be broken until you achieve your success.

All the NFL greats have done this, but in Tom Brady it is the most apparent. He had to have mind-body agreement if he wanted to get a scholarship after a not-so great high school performance followed by a rickety start at Michigan. Sure, he didn’t pull this off all the time, and he definitely wasn’t able to pull it off for a whole game, but that’s the great thing about having agreements with yourself. If you can convince your body to act according to your wishes the effect will be an explosion in your charisma. If you are able to do this at least once a day, you will see the world open to your business vision. During the Orange Bowl against Alabama, Tom Brady threw in perfect accord with his mind to have three touchdowns in the third quarter. He was able to pull this off at such a crucial time because he was practicing it since the ninth grade and every day since. Mind-body agreement earned him the nickname California Cool just as mind-body agreement earned Joe Montana the nickname Joe Cool decades earlier. I know this may sound like wacky-hippie stuff, but just think back whenever you felt anxious, nervous, or terrified to do something. Perhaps it was asking the girl next door on a date, or maybe you had to present a business deal in front of the company’s partners. It was something your body wanted to do because of the stimulus of the girl and the company, but your mind didn’t want to because you might face rejection and hurt the almighty ego. Now when failure wasn’t possible you always have mind-body agreement, such as walking around the block, eating a hotdog, or calling your parents. You probably felt great doing these things, well that’s because you didn’t have to worry about failure and your mind got out of your way. It’s easy to have mind-body agreement for easy things, but the harder it gets the harder it is do accomplish this because of the fear of rejection/failure. The only way to get over this fear is to fail at it until you become competent and gain confidence. Eventually, you will succeed and when you succeed once it creates the belief that you can do it again, making mind-body agreement possible.

Every champion does this whether they know it or not, but if you can consciously remove the stimulus out of your life and only act according to your desire you will have the greatest corporation in the world.

You may feel tempted to exploit your competitor, so you can come out on top, but this approach doesn’t do anything but eventually destroy yourself. For example, you never see Tom Brady taking advantage of Peyton Manning during a moment of weakness, so he could come out on top. If he did then the media would probably frown on him and Brady would lose the respect of his fans and peers. He might lose endorsement deals and his skills may begin to waiver from stress. Exploiting your competitors is a downward spiral, which many can’t escape from. Why do you think that so many politicians end up with scandals and left in ruin? Because they build their campaigns on exploitation, digging around for any skeletons they can unearth from their competitors proverbial closet. They may win the competition, but they lose themselves in the process.

Never exploit your competitor to make a quick buck because you will lose the fortune of the dedicated and honest.

The power of a simple “thank you” is limitless. It can do wonders for your relationships, especially the ones found in the workplace. California cool is well aware of this power, seeing how he gave all his teammates a pair of Uggs after they won the Super Bowl. It was a gesture that everyone appreciated and helped strengthened those important bonds needed to win the big games. You’d think that more bosses and employees would use this powerful technique more often, but it rarely comes out of people’s mouths although they are never short of criticisms.

No one likes a critic, especially from an employer they don’t respect. Instead, say thank you whenever you see an act in the workplace that you appreciate. It doesn’t take that much extra effort and it will make your employees feel appreciated. This in turn will make those same employees want to work harder for you in the future and will begin seeking the ever elusive “thank you.”

Remember, the heart of a champion can be infectious and when you give praise instead of criticism you will inspire others to your level.

Tom Brady never had a moment in his football career where he wanted to deliberately jeopardize someone. Even when he was experiencing his most trying tribulation with the Lloyd Carr fiasco, he didn’t play the blame-game and focused on being the best quarterback he could be. He was determined to do good in both physical and mental practice. Brady didn’t have any shouting matches with his frustrations or coaches, but quietly stated his case and went to work to prove his excellence. It took him three years to show the brainiacs at Michigan that he was top tier material and even then he only made it to the NFL with a hair’s breadth as he was drafted in the 199th pick of the sixth round. Tom Brady had his fair share of obstacles to overcome, probably more so than others, but he overcame them all and he did this by always committing to do good work. He never settled for less-than satisfactory performances and demanded greatness from himself and those around him. This attitude brought him great success as one of the greatest quarterbacks in the history of the NFL.

So how does this pertain to you? It’s very simple—always do good. But what do I mean by “good?” Be honest, fair, and never cut corners in your work no matter what kind of work you do. If you’re not honest people will see you as a liar and will not have faith in your products. If you’re not fair people will feel ripped off and see you as a crook and will see your products as scams, and if you cut corners your product will be of lesser quality and your customers will see it as cheap and consider you cheap as a result. You can’t last long in the business world if you don’t do good work all the time because of the competition. Perhaps back in the day you could have been dishonest and get away with it, but not in the information age where consumers have the power of the internet at their finger tips. Do yourself a favor and model your business plan after Tom Brady’s work ethic and you’re sure to do great things with your company. If you can do this you will have the heart of a champion and, consequentially, you will have the hearts of America.