Thomas Edison - One of History's Greatest 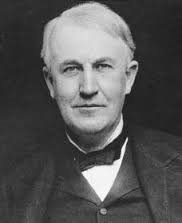 Probably the most prolific inventor of all time, Thomas Edison can also teach us some business lessons:

1. Don’t Let Failures Turn You into a Failure

When people think of great inventors one of the first names that comes to mind is Thomas Edison. Of course his most notable invention was his improvements on the incandescent light bridging the way to the light bulb we know today. However, what most people do not know about Edison is his failures. Success came to him after many failures. It is evident then that he did not let his failures stop him from one day achieving success. Anyone who wants to achieve success in any industry needs to keep in mind that most of the time success does not come easily. Business leaders need to be prepared for failure, not only once, but maybe many times. Sometimes when we see other people succeed while we are failing we think that we will never get to the place they are, however, it is nice to be aware of the fact that they have probably failed before. The important thing is to keep trying; most people who achieve great things are where they are because they failed but tried again and again.

Shortly after a large fire consumed more than half of Edison’s experimental plan, he gave the word to his employees to report in to work as usual the next day. He not only tried again and again whenever something went wrong, he did it with strong perseverance. He was ready to try right way; he did not let his failures get him down for even a day. Even after losing his authority in General Electric he kept working on developing new projects in other industries. It is important to not only be aware that failures will come, but also to keep in mind that it will be important to be ready to take action right after a failure .

3. Make Sure There is a Market

One of the first patents Edison made was an automatic vote tally machine which could make it easier to count votes than by hand. The machine was a commercial failure, and he learned that if he wanted to make money he need to make people would want. From then on he was interested in making things that will actually sell or be useful to people. This might seem obvious, but it is important to make sure that whatever service or product you will try to sell has actually a market. Sometimes it can be hard to predict whether the public will like a product or not, but you can try to at least do as much research as possible, and try it with a few people. You can also always put yourself in the place of your possible customers and decide whether your product will be useful or not.

4. Discontent Is the First Necessity of Progress

Thomas Edison once said, “Discontent is the first necessity of progress.” Competition can sweep in and take market share as soon as one gets comfortable with things. Business leaders cannot afford to be satisfied things; according to Edison progress is only possible when people are looking to make things better. Being satisfied with everything the way it is can prevent people from trying to change things. It might sound hard to enjoy success and be happy with one’s life, while at the same time not be satisfied with things the way they are and to always look for ways to make them better, but it is possible to be a happy person and at the same time know that you can always do better.

5. Work Hard but Do Not Let that Take the Place of Working Smart

Edison had so many accomplishments that it is evident he knew how to work hard. He had over 1,000 patents. However, there is a difference between working hard and accomplishing something and just working hard to keep busy. He was always working hard but he always achieved new things. He had specific goals every time he started working on something. Sometimes it was to make a product last longer, or maybe to make it more affordable. His work was always meant to accomplish something specific. Being busy all the time does not mean you are actually being productive. It is important to create good plans and systems for working that actually try to achieve something and be productive. In order to determine whether you are being productive or not you can try to determine if you are accomplishing your goals or accomplishing things that will be beneficial for the company.