The Business of Raphael - One of History's Greatest Artists 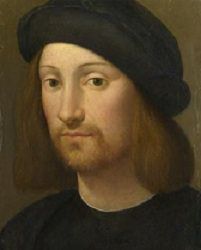 I recently had a friend return from a trip to Italy and he reminded me of the great artists that orginated there. One such artist was Raphael Sanzio, most commonly known as simply Raphael, he is considered by many to be one of the greatest artists of all time. He is believed to be the artist that best expressed the doctrines of the Christian Church through the figures in his paintings. Raphael’s figures have a physical beauty considered the epitome of Italian High Renaissance art. His work was considered the standard to which all other artists should aspire. Raphael’s work was used as the model to train other artists and has been widely copied through the ages.

In addition to his career as an artist, Raphael was also a noted architect and designer. His hand can be seen across Rome, especially in the Vatican Square. He created numerous elements for the Sistine Chapel and the Vatican Palace.

Raphael was well respected as both an artist and a man. He was handsome, charming and well-mannered. Having been brought up in a court setting as the result of his father’s appointment, Raphael had flawless manners. He was popular with nobility and moved easily in higher social circles. Although most people enjoyed his company, he did have a rivalry with fellow artist Michelangelo. Michelangelo harbored some jealousy over Raphael’s talent and believed that the other artist had plagiarized his work. It wasn’t until many years after Raphael’s death that Michelangelo softened his opinion of Raphael and spoke more generously of him. Raphael, for his part, admired Michelangelo and modeled some of his fresco work in the Vatican Palace after the older artist.

In addition to just enjoying his artistry, we can learn the following business lessons from Raphael:

1. Mediation Instead of Altercation

One of Raphael’s greatest strengths was his ability to mediate disputes between his apprentices and his patrons. His skill in resolving arguments contributed to the smooth operation of his workshop. He ran one of the largest art workshops in Rome, employing around 50 people. The size and scale of his commissions often required teams of artists to complete the work. As modern business people know, teams of almost always experience some friction when working on a project. Minor disagreements can quickly escalate into major arguments without a strong leader to keep things on track.

Mediation is a vital skill in modern business practice. Many leaders receive mediation training and an entire industry has developed to fill this niche. With mediation, a neutral third party facilitates rather than directs the mediation process. With mediation, the facilitator seeks to resolve disputes to the satisfaction of all parties involved. Mediation usually relies on talking and other techniques to solve disagreements. Skillful mediators help keep projects running smoothly. By developing this skill, business leaders take a page from Raphael’s book and maintain a high degree of efficiency in their own workshops.

2. Good Manners Are Good for Business

Raphael was a popular figure in the courts and noble social circles. His father was a court painter in a minor nobility. He lived in the noble house and was exposed to the decorum and manners of people of culture from an early age. Raphael developed impeccable manners as a result of his court upbringing. His etiquette and politeness stood him in good stead and allowed him to move with ease around nobles and royalty.

When building a business, it is important to remember that good manners are vital to building solid relationships. New business leaders often require mentorship from older, wiser leaders and established businesses. While a new leader is learning the ropes, he or she needs to pay attention to the niceties of polite society. Please and thank you open many doors. Business leaders who mind their manners are pleasant people to associate with and find themselves sought after for mentorship and additional business opportunities. Raphael knew that good manners were essential to conducting business. Modern leaders would do well to follow his example.

3. Refuse to Engage in Petty Disputes

Raphael managed a large workshop while he was living in Rome. He employed around 50 people to assist him with his commissions. When working with such large groups, disputes often crop up. Raphael refused to get involved in disputes between his assistants and his patrons. Instead of taking sides, Raphael negotiated resolutions to the arguments.

Modern business leaders need to follow Raphael’s example. When arguments become heated, it is easy to get caught up in the emotion of the moment. Business leaders need to remove themselves from the emotional aspects of the argument and maintain an air of neutrality. Conflict resolution requires a neutral third party to help people caught up in the dispute to see the other person’s point of view. A leader that has gotten caught up in an argument has lost perspective and can no longer effectively negotiate a settlement to an argument. In order to negotiate satisfactory resolutions to arguments, leaders need to follow Raphael’s example and refuse to take sides in a disagreement.

4. Remember Those Who Contribute to Your Success

Raphael had many friends and colleagues through his career. When he knew he was dying, he wrote his will and made provisions to care for those closest to him. He provided funds for his mistress and shared his possessions with the leaders in his workshop. These people contributed significantly to Raphael’s success as an artist and he remembered their contributions to his life.

Modern business people should follow Raphael’s example. While it is not necessary to bequeath worldly possessions to business associates, it is important to remember those who have helped advance your career. Gestures of gratitude don’t have to be large and grand as long as they are sincere. A simple letter to a supervisor praising the efforts of a staff member who has gone above and beyond the call of duty is greatly appreciated. Business leaders that follow Raphael’s example are popular with their staff and inspire them to work harder and give a little more than those who rule their employees through intimidation.

5. Enjoy the Good Things in Life, in Moderation

Raphael enjoyed the wealth and status that his position of master artist afforded him. While he was not given to excess in many aspects of his life, he did enjoy the company of women and was rumored to have had numerous affairs. Art historian Vasari reported that the illness that claimed Raphael’s life was the result of a chill and fever he caught as a result of a night of passion spent in his lover’s arms. There were times during his career that Raphael was so distracted by a woman that he was unable to concentrate on his work. In one case, his lover was given rooms at the work site so that he would concentrate on the job at hand. Raphael, for all his talent and skill in art and management, failed to find a harmonious balance between his personal and professional lives.

Business leaders know that it is important to balance professional and personal lives. Leaders who focus solely on work tend to miss out on those things that add value to life. More than one study has revealed that people looking back on their lives rarely regret not spending more time working. In fact, the opposite is often true. Many people regret working too much and missing out on things like spending time with family and friends.

Likewise, leaders that spend large amounts of their time pursuing pleasure often lose focus on their business. Leaders that are not paying attention to their business may lose out on new opportunities or miss problems developing within their business. Distracted leaders often miss deadlines and don’t inspire confidence in their employees. Staff members need to believe their leader is in control of the business and its projects. Employees who feel as if their leader is not there for them are less willing to go above and beyond the call of duty to support the leader should the need arise.

Wise leaders would do well to examine Raphael’s example and learn from it. While power and status provide perks that make life pleasurable, it is important to maintain perspective and balance work with pleasure. Tipping the scale toward one side or the other results in a dysfunctional business and unhappy employees. Maintaining a solid business requires maintaining a balanced work and personal life.