Stan Musial - One of Baseball's Greatest 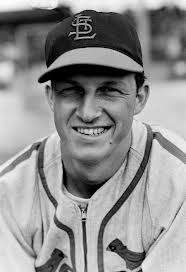 With the post season closing in and the St. Louis Cardinals leading the pack, I thought it would be appropriate to discuss some business lessons we can learn from one of St. Louis' greatest players, Stan Musial.

In both his personal and professional life, Stan showed a great deal of commitment. At age fifteen Stan met his wife Lillian Labash. She became his high school sweetheart. When they were nineteen they got married. Stan stood by his wife’s side supporting her for the entirety of her life. They were married for over seventy years when she passed away at age 91 in 2012. Even in death they were not separated for very long. Stan passed away of natural causes nearly eight months later. He left a legacy of being a committed husband, father, grandfather, and great-grandfather to his four children, eleven grandchildren, and twelve great-grandchildren.

In his professional life he was committed too. Also at the age of fifteen, Stan started playing semi-professional baseball for the Donora Zinc team managed by neighbor and former minor league pitcher Joe Barbao. He excelled at the both the game of baseball and the game of basketball, which resulted in him having to make a tough decision at the end of high school. He had to choose between playing professional minor league baseball or college basketball on an athletics scholarship to the University of Pittsburgh. His father, a Polish immigrant, wanted Stan to receive a college education. For that reason, Stan felt pressure from him to accept the basketball scholarship. But Stan realized that baseball was the path he wanted to pursue, so he accepted the minor league position and committed himself to perfect his game for over twenty-five years.

As a result of his strong performance on the field, Stan the Man often received lots of praise and recognition. Stan remained humble while his popularity continued to rise. He played baseball for the pure enjoyment of the game, not for the possibility of public fame. Top baseball athlete Ty Cobb once paid a compliment in an article featured in Life magazine where he asserted a claim that Stan Musial was an even better player than baseball legend Joe DiMaggio. Stan responded to the compliment by turning the compliment back on Ty Cobb by saying that he was baseball’s best, so he appreciated the kind words, but that he would never consider himself better than the famous Joe DiMaggio.

Stan grew up in a small town with strong family values. When he made money and became famous he continued to live a modest lifestyle with his dear wife and four children. He lived like he would have lived in a normal situation out of the public eye. He also was generous with his time and money. For a time, he was unsure he could support his family playing baseball in the early years. Friend and manager Dickie Kerr invited Stan’s small family to come live in his home with his family to help him stretch his salary to support his family better. Stan named his firstborn child Richard after him. And when he became more financially sound, he purchased a $20,000 home for Kerr in Houston, Texas.

After retiring he spent most of his time enjoying time with his family made up of his wife, four children, eleven grandchildren, and twelve great-grandchildren. Because of his long career with the Cardinals, he was a public figure, so accordingly he had public obligations. But Stan did not seek out these public appearances to boost his ego. He instead used these public appearances as a way to give back to his fans and promote the wholesomeness of America’s favorite pastime. To this day, Stan the Man is in many ways the face of the St. Louis Cardinals.

Stan was a service-oriented man. Even how he got his start in the baseball industry has its roots in service. His neighbor Joe Barbao managed a local semi-professional team composed of all adult players called the Donora Zincs. One season they were down a few players and desperately needed more people on the team. Joe Barbao had taught Stan how to play baseball when he was a small boy and knew his potential, so he asked the young teenager to step in and play for the team. Wanting to help his neighbor out and having a strong interest in baseball, Stan jumped on board as a player for the Donora Zincs.

When the U.S. was in the midst of World War II, Stan left major league baseball to enlist himself to serve the country in the Navy. He worked hard both in noncombat and combat roles to ensure the safety of U.S. citizens until he had to take emergency leave. The reason behind his emergency leave from the Navy was also grounded in service. He left the military to return home to Pennsylvania to care for his sick father.

After retiring from baseball he continued to serve other people. For a few years in the late 1960s, Stan fulfilled the role of President Lyndon Johnson’s physical fitness advisor. In that role he provided ideas of how to promote physical fitness and healthy living to the American people. He also worked with the Cardinals in managerial roles to help them as a team. In 1967, Stan worked as the Cardinals’ general manager and led them to winning the World Series championship.

One of Stan’s most impressive qualities was his ability to endure anything and everything. As mentioned previously, when Stan was starting out as a new professional baseball player, he faced some financial struggles. Choosing to marry at the young age of nineteen and becoming a father before the age of twenty caused him to have more responsibility than most young men his age. He had the burden of supporting a family of three on a small salary. He considered quitting his baseball dream to make more money in the short term, but ultimately decided to endure the temporary financial hardship of a low income after making the necessary arrangements and adjustments to make ends meet.

Figuring out how to make ends meet was not the only challenge he had to endure with his baseball career. In 1940, Stan was playing for a Class D minor league team. He performed so well that season that he had been bumped up to a Class AA minor league team for the next season, however, near the end of the 1940 season Stan suffered a severe shoulder injury. Starting out in the 1941 season, he was not fit to play on the Class AA minor league team. He was demoted to a Class C minor league team, but somehow he pushed through the pain and strengthened his shoulder significantly. He strengthened his shoulder so significantly, that he impressed the Cardinals’ manager and received an offer to play in the major leagues. He played his first major league game just over a year after injuring his shoulder.