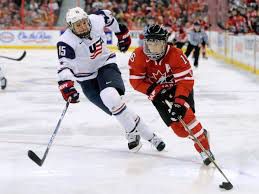 Games using a stick and a ball have been enjoyed by people for thousands of years. However, finding that sort of recreation in cold, icy climates can be difficult for anyone. Being limited by temperature, people began to play versions of field hockey in the fields of European countries. Later, when British soldiers settled in areas of Canada, they adapted their form of field hockey to be played on the ice and snow that was so prevalent in the colder areas of the country. Since the introduction of ice hockey, the sport’s popularity has thrived in North American countries (Particularly Canada and the United States), and is now a part of the winter Olympics. The following are 6 lessons we can take from ice hockey and apply to business:

Sometimes a team will go up against a ruthless competitor. In business, we must recognize that our competitors don’t or won’t give up, and as leaders we must adjust our thinking to execute operational excellence to stay on top. Activity is not the same as progress.

Unlike baseball, football, or basketball, hockey has a power play where you get to have more players than your opponent. This happens as one team is penalized and the other gets a power play. Ever feel over matched and yet vanquish against all odds?

In hockey, the things you do early in the game pay off as the game continues. Small decisions like dumping the puck and finishing your checks ultimately wear down the opponent and create more chances later in the game. The same applies in business. Little things done early can pay off in the long run. For example, employees learn more from constant feedback than a year-end review process. Project planners can use early criticisms to strengthen their proposals.

3. Leading indicators are helpful, but no guarantee of success

In hockey, shots on goal, hits, and face-offs won are the best indicators of success. More often than not, the game winner is consistent with the winner of these statistics. Key indicators can help a business or project focus on the factors that are important and controllable. Keep workers focused on a few key items, but never assume that success is limited simply to those items.

Conflict is an important part of progress. Many hockey teams use fighting in games to change momentum. While hockey-style fighting would be grossly inappropriate in the business community, arguments and disagreements are a natural part of getting things done. Successful companies like General Electric have passionate arguments all the way up to the boardroom level. The results speak for themselves.

Every player has to understand their identity. Hockey requires every team member to learn their role on the ice and focus on executing it to perfection. Strong businesses have similar characteristics. Each person must know what they were hired to do and know when it is time to execute that role. Every person needs to be focused on their specific job. That is how the best organizations succeed. Of all major sports, hockey is the ultimate team game. Ice hockey is less about adoration of individual hero-gods, and more about a community sharing a journey.

Hockey is the smallest of the major sports because it’s geographically limited. But hockey fans are the most tenacious and loyal, and relations between the players and the fans are likely the closest of any sport. In business, treat the loyal guests and clients right!