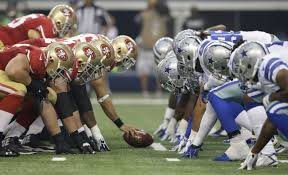 American football is one of the biggest sports in the United States. Its’ hard hitting, action packed games bring fans to pack stadiums, with hundreds more watching games at home every week. The sport has evolved with time, bringing bigger, faster, stronger athletes to participate. As the country’s most popular sport, it brings in billions of dollars in revenue every year. Football is very unique to the United States and its players and fans take pride in that. Because of its uniqueness, there are many lessons that can be learned from the sport of football.

It’s a team sport. You have to learn how to work with 10 other people. You learn how to be on the offensive (being proactive) as well as the defensive (being able to react and overcome in certain situation). On offense you have to learn how to follow a leader, the quarterback. You are only as strong as your weakest link. Football is broken down into 4 different quarters. Two fifteen minute quarters and then a halftime followed by two more fifteen-minute quarters. This allows the coaches and players to assess and analyze what is going on and what adjustments they need to make on both offense and defense to win the game. In business, it is important to take time to analyze what adjustments need to be made in order to provide the best services for customers and to ensure that everyone is performing at their highest level. This can be achieved through quarterly reports throughout the year.

On offense there are plays that are drawn up in order to get the ball down the field to try and score a touchdown. Each player has an assignment to carry out and if they fail to do so the play won’t work. Every day in the business world, managers give their employees assignments to carry out. If they are not done properly, the business cannot succeed and they will not progress. In the big picture, every little assignment matters. Take time to make sure your employees understand this big picture. Like in football, the big picture is to score, in business, it is to increase sales. Help all employees understand how their assignment contributes to the overall success of the company.

Every good team needs a quarterback to lead them to victory. A quarterback needs to not only have the physical ability to throw the ball and run, but also the mental toughness to be a leader.

There are times that the team is discouraged. It’s the quarterback’s job to inspire them and lift them to be better. Think of Joe Montana, about whom you already read. There were so many times that his team entered the fourth quarter losing. He is sure to have had teammates who were wanting to give up. It was up to him to have a “never say die” attitude. He inspired those teammates to keep going and to believe that they could win. A leader of a business needs to have this same attitude. Failure will surely happen at some point. You need to be able to help your team continue to believe in the company. With a positive attitude, you can lead your company back to success and overcome trials.

4. Time Management is Crucial to Success

Football is a sport in which time is very important. A coach needs to be able to manage the clock and know how to effectively communicate with his team. As the game progresses clock management becomes more and more important. If a coach doesn’t pay attention to the game clock he could waste precious seconds. In business it’s important to pay attention to the time and make sure that it is being used most efficiently as possible. There are times in football games when the coach doesn’t have time to get a play into the players on the field. It is up to the players to be aware and recognize that they need to run a play and not wait to be told what to do by their coach. In football teams have what they call a “2 minute offense”. This is put in place towards the end of the game when there isn’t much time left. The players have certain plays that they know will be ran and in which order they will be ran. This saves them precious time that would be lost from huddling after every play. Just as football teams have a 2 minute offense that can be put to use, every business should have a similar plan to accomplish things in an effective, orderly fashion. There may not be time to hold a meeting and talk about who needs to carry out which assignment. Planning beforehand what to do in case of an emergency or a time crunch will give greater odds to the project being completed on time.

5. Must Be Able to Adapt to Changes

This leads into another important part of football, which is improvisation. There are times that there are “busted plays” in which not everything goes as planned. There is either confusion on who was supposed to go in motion or whether or not it was a passing play or a running play. In all cases, this isn’t ideal but that doesn’t mean that the team should give up. A quarterback can make something out of nothing and run for a few yards instead of just being frustrated with his teammates and taking a sack. Football isn’t a sport where you find who is at fault on your team.

You need to come together and pick each other up where there is slack. You improvise and make up for the shortcomings of others. Businesses need to do the same. Each employee should be more concerned about the project being completed rather than who did what. They need to improvise, recognize what needs to be done, and then go and do it instead of pointing fingers.

Don’t get down if the other team scores a touchdown. It’s important to have a long term perspective and remember that each game has four quarters. It is easy to become discouraged if you are losing but people show their true character in the face of adversity. It is easy to focus on what is going wrong instead of taking time to look for the positive things that are happening. It’s important to be self-analytical and recognize your faults but too much analysis can stunt growth and progress. It is the same for businesses. If bosses are too hard on their employees they won’t work productively. A coach needs to use constructive criticism instead of instilling fear in his players. A boss needs to do the same. A boss wants his employees to believe in themselves and that they can complete the assignments that they have been given. If they fear they will most likely fail.

7. You Must Prepare in Advance

So much preparation and practice happens before the game starts. Weeks and months are spent training to be in proper shape to play football. Many teams require that their players pass physicals at the beginning of each season to ensure that they are in the best physical shape they can possibly be in. if they don’t pass the physical they are not allowed to play on the team.

Businesses can also set similar expectations for their employees. Physical fitness may not be the most important thing but ability to complete tasks is important. Many companies have annual trainings to make sure their employees are ready to do all they need to do.

Communication is key factor to one’s success in football. It helps build team chemistry and foster good relationships. If there is more communication, there is less confusion. It helps build trust between the team. That is why before each play the team meets in a huddle to communicate one to another the play that they want to run. This eliminates insecurities and confusion. Have effective meetings. Make them short and to the point but meet often to go over responsibilities and plans of action.