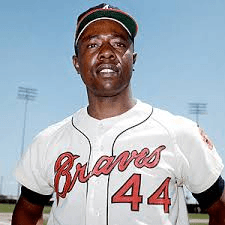 Native to Mobile, Alabama, famous baseball player and civil rights activist Henry “Hank” Louis Aaron hit his 500th home run 47 years ago today. Hank was born to Herbert and Estella Aaron on February 5, 1934. He and his six siblings grew up in the poorer part of town referred to as “Down the Bay” until the family moved to Toulminville neighborhood when Hank was eight-years-old. It was in that neighborhood that Hank discovered his affinity for football and baseball in the pick-up games he and his siblings played with the other neighborhood children. Both Hank and his brother Tommie went on to play professional baseball and broke the record for most home runs made by siblings. While Hank excelled at baseball, business leaders can also glean some valuable lessons from him:

Hank played baseball at a time when it was not popular nor widely supported for African-Americans to be a part of the MLB. He also was talented enough that people were outraged when it looked like he would likely beat Babe Ruth’s record for most home runs hit. With this outrage came loads of hate mail and death threats endangering both Hank and his family. With courage, Hank held onto the hope that following his dream to pursue a baseball career would ultimately be worth it. And worth it, it was. Hank pushed through the frightening times with his head held high as he continued to work towards his baseball goals. His hard work paid off because he did end up beating Babe Ruth’s home run record and surpassed it by forty-one more home runs by the end of his baseball hitting career. And while being courageous, he also remained cautious by making sure he stayed in separate hotels in hiding to protect his teammates and his family members. Some business practices may not always be easy or ethical, but we must have the courage to always do what is right despite the outcome.

Hank’s courage is what gave him the motivation to go on in pursuing his dream of playing baseball, but his perseverance is what turned the motivation into action. Hank could have given up when he was denied a position in the major leagues after his first audition at age fifteen. But Hank did not give up. Instead he started playing for some semi-professional leagues including the Negro League. And when he played with those teams he played hard. He played so hard in fact that he got noticed by the major leagues. The Milwaukee Braves first picked him up to play on their minor league club team the Eau Claire Bears. After proving himself over the course of a single season, he was picked up to play on the Braves’ major league team. Even in the major leagues he faced many challenges. He did not get the fame and acknowledgement he deserved due to racial prejudice. But the lack of acknowledgement didn’t stop him from playing the game and playing it well for that matter. Hank still holds many records to this day. His perseverance did not only help him succeed, but it helped him to be in a position to help other children with their dreams through his two organizations the Hank Aaron Rookie League and the Chasing the Dream Foundation. Business transactions and success often take years with many failures along the way. Many times the key to ultimate success is perseverance.

Boldness is often associated with loudness, but Hank was not loud. He was a humble man who exhibited a quiet sort of boldness. He had a soft approach that made a lasting influence in the world. Hank’s dream was to play baseball, so Hank did everything in his power to play baseball. He switched high schools in part to pursue a private baseball team. He tried out for MLB. When he did not make it, he played in the Negro League. He tried out again for the MLB. When in the MLB he set out to win records. When the death threats and hate mail poured in, he tried harder to break Babe Ruth’s home run record. He especially showed boldness when it came to his role with civil rights. In the midst of his career, America was on the brink of great change. Jackie Robinson paved the way for Hank and other African-Americans to play professional baseball, and Hank pushed the barriers even further by proving that he was equally as good if not better player than the idolized white player Babe Ruth. He showed the world that not only could African-American's play professional baseball, but they could play it just as well or better than their white contemporaries. In the business world, one must be bold and try things that others shy away from to be noticed and successful.

Even though becoming a professional baseball player was important to Hank, it was not the most important thing. Hank understood his role as a public figure and worked to be a role model for children. When people were harassing him inappropriately, he did not break into street fights. He presented himself with dignity and acted respectable despite the ugly circumstances. Instead of acting out in anger when he received death threats and hate mail, he first took measures to protect himself, his family, and his teammates and then used it as an opportunity to speak out in favor of civil rights. He became a symbol of the civil rights movement to inspire people all over the U.S. No matter how successful a business may become, it is important to be generous to employees, customers, suppliers and those in your community. The world is bigger than just your business and you need to be a generous contributor.

While Hank Aaron did not act out in violence against his oppressors, he did not stand silent. The act of staying in the game as a professional baseball player says a lot in and of itself—because other people wanted him out of the game. Hank Aaron wanted all people to be treated fairly, justly, and equally and he showed the world by his example. In business, you may have opportunities to take unjust advantage of customers, suppliers, or competitors, but this will only hurt your reputation and success in the future. Be honest, fair and just in all your dealings.