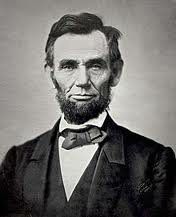 Lincoln was one our most respected and beloved Presidents. What can we learn from him to help us in our businesses:

As we read the Gettysburg address we are moved by the eloquence of this masterfully crafted work. Looking at the history of his life, we can see that such mastery of words can be attributed to his study and practice. Lincoln did not receive much formal education but he read a great deal. Mastery of words is important to business because people become moved and persuaded according to their thoughts and perceptions; they act according to how their feelings relate to their knowledge. By mastering words one is able to improve his or her ability persuade and move people to action. President Lincoln, as a CEO, would know how to inspire his employees and and attract customers through his persuasive use of language.

Lincoln would practice giving speeches to his friends in his youth. Later on in his life he and friends would have storytelling contests. He knew the importance communication plays in being effective in all aspects of one’s life. Though logic gives reason to act storytelling can give one the pathos or emotion that leads to action; when both are interwoven with each other, it can have a strong influence. We see this often in marketing. We see this often in marketing. For example, we often see commercials where a mother gives her child a nutritious meal (the product being advertised) and scenes from family life are shown to arouse an emotional appeal which can easily be related to many people. The actual argument may simply be the nutrition and lower cost while the underlying emotional appeal is that as a responsible parent you are allowing your child to have what he or she needs to have the best childhood possible.

When we think of Abraham Lincoln we think of the end result of lifelong self mastery. He had very little formal education, but through his personal study he was able to develop the knowledge, skills and insights that helped him hold the nation together during a time of civil war. It could have been easy for Lincoln to simply live with the little education he had received and simply continue working at the store he worked at as a young man. Of course that is the same with any person involved in business. You cannot expect yourself to master anything if you cannot master yourself.

Early on Lincoln made remarks in several instances which deeply criticized opponents. After criticism of one particular person, he was challenged to a duel. When both parties met for the duel, it was called off. This seemed to be a turning point for Lincoln. We do not see much criticism given from him from that point on. In fact, we see accounts where he chooses not to criticize when others in his same position would have done so. He became a leader who could understand the feelings of others. In his inaugural speech he stated “We are not enemies, but friends. We must not be enemies. Though passion may have strained it must not break our bonds of affection.” There are many instances where he was sharply criticized and was still kept even tempered and did not resort to exchanging ill remarks. In business relationships, criticism often does not help. Many who are criticized will justify their positions just as the man who challenged Lincoln to a duel.

5. Know How to Take Criticism

Once when told that he was two-faced, Lincoln replied, “If I had two faces, would I be wearing this one?” Not only did he show his humor in this instance, but he also demonstrated how to have self-control when being criticized. This is a real test of ones self mastery. A quick attack back at the one giving criticism only shows that you are reactive. How can a business leader expect to persuade or influence another with a sharp and uncontrolled reply to criticism?

Lincoln once said, “You cannot escape the responsibility of tomorrow by evading it today.” In his life it is evident that he truly believed this. The civil war could not go on pause for Lincoln and it certainly could not be won if action was taken only when it was convenient. All business owners have responsibility and accountability. They are accountable to shareholders, creditors, customers and others. When business owners do not meet the expectations of those they are accountable to today, there may be less people to be accountable to tomorrow. In other words, they lose the confidence of those who keep them in business.

“Better to remain silent and be thought a fool than to speak out and remove all doubt.”

“Always bear in mind that your own resolution to succeed is more important than any other.”

“Nearly all men can stand adversity, but if you want to test a man’s character, give him power.”

“Character is like a tree and reputation like a shadow. The shadow is what we think of it; the tree is the real thing.”

“Give me six hours to chop down a tree and I will spend the first four sharpening the axe.”

“Things may come to those who wait, but only the things left by those who hustle.”