Lawrence Taylor - One of Football's Greatest 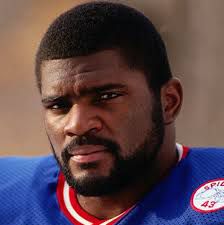 In the introduction to this book I described the qualities of excellence embodied by the superstars portrayed herein. Lawrence Taylor is the exception, at least in some respects. In his autobiography LT: Over the Edge: Tackling Quarterbacks, Drugs, and a World Beyond Football (co-written with New York Post columnist Steve Serby), he recounts how he rarely took part in off-season training programs and practiced like a stubborn child tasked with a chore. Some of his most memorable games were played with a hangover. His cocaine addiction caused him to get suspended from the NFL after twice testing positive for the substance. When he nearly got him-self killed in a car accident as a result of speeding, his team insured him for $2 million because the general manager thought Taylor would not live past the age of thirty. While his actions spoke volumes on their own, Taylor disclosed early in his career, “I guess that I'm just a plain wild dude.” Former teammate Beasley Reece defended Taylor: “To say that Lawrence Taylor is a bad person, those are the words of an idiot—or a person who is speaking from ignorance or doesn't know the man. He's a good person. He's a good guy who is a drug addict.” Regardless of one’s judgment of the man’s character, it cannot be denied that he truly led a frenzied life both on and off the field.

Yet, his contribution to the game cannot be overlooked or denied him on the basis of his personal failings. Taylor, who spent his entire thirteen-season career in the NFL as a New York Giant, revolutionized the way the game is played, by blitzing with such ferocity and innovation that teams had to come up with new ways to protect the quarterback’s blind side. Originally, the outside linebacker position used the read-and-react technique—wherein the linebacker would run the middle, read the quarterback’s eyes and where the ball was headed, then pounce to stop the play—exemplified by players like Dick Butkus, Ray Nitschke, and Jack Lambert. Taylor was more disruptive than that. He attacked with powerful strength and quickness to swoop in for a play from anywhere on the field. Pittsburg Steelers quarterback Terry Bradshaw knew first-hand about Taylor’s destructive force, “He dang-near killed me, I just kept saying, ‘Who is this guy?’ He kept coming from my blind side and just ripped my ribs to pieces.” Taylor set the standard for the ideal linebacker as one who locks onto the quarterback like a vicious beast locks onto its prey.

Lawrence Taylor’s oppressive skill garnered him awards and respect and even special at-tention from the coaches of opposing teams. To keep up with him Redskins coach Joe Gibbs had to develop a special offensive strategy and the position of h-back. “We had to try in some way have a special game plan just for Lawrence Taylor. Now you didn’t do that very often in this league but I think he’s one person that we learned the lesson the hard way. We lost ball games.” Teams would actually go over plays on the drawing board using the number fifty-six to designate the unique threat, Lawrence Taylor. Who is “fifty-six” in your field? If not you, why not?

Phil Simms, a former quarterback with the New York Giants, said, “On the pass rush, [Taylor’s] an animal. He’s either going to run around you or over you. With his quickness, he’s full speed after two steps.” And this sentiment could not be truer of the man who perked up in the heat of a down-to-the-wire game. In those final moments, some would wither under the pres-sure if left holding the ball. But Taylor thrived in those moments. Surely, you will meet folks who have their arm cocked, ready to pass off the ball. Be the person who catches the ball.

Just as much wisdom can be gleaned from Taylor’s successes as from his failings. During and unfortunately after his NFL career, the law has caught up with him. A responsible business should go beyond the letter of the law to protect its stakeholders from damaging effects. Aside from being what is right, respecting conventions as well as national and international laws and trading fairly insulates your business from legal mires and protects your public image. If you are starting your first business, make sure it is registered and your taxes are paid.

2) Break the Rules (That Are Meant To Be Broken)

Lawrence Taylor redefined what it means to be a linebacker and to cover a linebacker. He also pioneered new methods for causing quarterbacks to drop the ball without tackling them, like chopping it out their hands. This means that he did not let mere convention stop him from doing something radical. Nor should it stop you from breaking the mold and shaking up the market. Improvise if you have to. Taylor’s improvisational skills were such a threat that, as St. Louis Car-dinals quarterback Neil Lomax learned, “even when he wasn’t getting a sack he was making an impact.” Lomax said, “We'd run at him. We'd throw at him. We'd have three guys on him. It didn't seem to matter. Problem was if you concentrated on him too much, they always had other great players who would get you.”

While Taylor’s talents are unquestioned, he had a great team to work with too. It wasn’t just a one man team with Taylor, but a cohesive collection of excellent players working on the same goal. The New York Giants needed to develop new methods to win, so the team worked together and managed to bring a different image to the Giants franchise by winning two Super Bowls in ’87 and ’91. Collaborate with experts in your field to tackle big, complex problems. En-gage in regular dialogues where every idea can be heard. Social intercourse is how innovative ini-tiatives are born. Even if you have the skills of a Lawrence Taylor, you don’t want to be a show-boat pony that takes everyone’s attention away from the parade. Working together on inventing new products and procedures will not only give you an edge over the competition, but will also create harmony in your organization. People like to feel included, even if it is minimal. They need to have that feeling of belonging, and if you always try to manage on your own what you are tell-ing them is that you don’t need your teammates help. This brings everyone down, including yourself. Collaborate on innovation to insure you have something to innovate for in the years to come.

4) Remain a Professional off the Field

A few of life’s best lessons can come from other people’s mistakes, and when it comes to making boo-boos, Lawrence Taylor is an expert. Shortly after joining the New York Giants, Tay-lor almost killed himself in a car wreck, causing his team to insure him for $2 million. And along with being a cocaine addict, Taylor was charge of third-degree rape May of 2010. The man who was a larger than life linebacker proved to be a failure when it came to his personal life. Sponsors didn’t want to get close to Taylor due to his debaucheries. Out of money, reputation destroyed, Taylor shows that being great at something is different than being great. Even though it is sad to think that a man with so much promise could fall so low, you must remember this important in principle in business, which is to remain a professional off the field. You can be the best business leader in the world, but if you are a despicable person when it’s time to clock out then you will ruin yourself. No one wants to buy good from someone they hate. You must be well liked by the community if you hope to do business with that said community. Sales people know that it isn’t the product that sells them, but the person. If you make a potential client your friend then they are more likely to buy whatever you are selling just because they like you. But the reverse is also true. If you behave however you like then you will face the consequences, including a fall from grace. A business leader should be genuinely compassionate and courteous towards everyone he encounters. This cannot be faked, because people will be able to pick up on your ingenuity. In-stead, fall in love with world and become a genuine person who only wants to do good things in the world. When you can be proud of your actions when no one is looking then you are on the right path of becoming a professional.

5) Create a Hill of Excellence

Probably Lawrence Taylor’s biggest fault in life is not creating a hill of excellence for his son, Lawrence Taylor Jr. or TJ. July of 2013, TJ was arrested for allegedly raping a minor. This incident occurred three years after Lawrence Taylor’s rape charges, leading many people to say the old idiom, “The apple doesn’t fall far from the tree.” This is true if you consider that children develop their morals based on their parents’. By parting every night and rendezvouses with pros-titutes, Taylor set a horrible example for his son to follow; he created the expectation that loose behavior is part of the family. People may think that it’s part of the Taylor genes, but I say it’s the environment where TJ grew up in, and how he handled it. Taylor should have created a hill of excellence for everyone to follow because even if the apple does fall close to the tree it can later roll down to success. This principle may not have much value as a business leader if you literally think in terms of child rearing, but consider yourself as model for greatness for your employees. Restaurants that have a culture of uncleanliness and treating customers horribly have more appal-ling employees than restaurants with high standards. If you go in any Michelin restaurant you can expect courteous staff waiting at your table because the Michelin guide has created a hill of ex-cellence where customers expect greatness from their recommendations. This expectation leads to more sales followed by a better reputation with the community. If you raise the level of excel-lence with your employees then you raise the level of your enterprise. This is what I call creating a hill of excellence that allows your staff to easily roll into. When you do the opposite then you make it difficult for your staff to do the right thing, and whenever this is the case you are sure to get into one pickle after another.