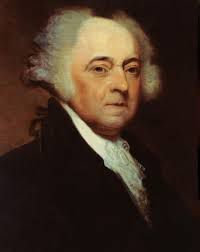 John Adams’s ancestors were Puritans, members of a religious group that fled England to have a chance to practice their own faith. They believed in being a “city on a hill,” or an example to people around them. John Adams, who was born as the oldest of three sons in the Massachusetts Bay colony in 1735, would inherit this legacy and serve as an example for many citizens of the United States.

John believed in the moral code handed down to him by his ancestors, a code of hard work and integrity. He felt an obligation to live up to that legacy. Though John’s family wasn’t especially rich, he recognized the value of education and worked hard to be accepted into Harvard College at age sixteen. His father wanted him to be a minister, but John wasn’t sure that was what he wanted to do. He taught school in Worchester, Massachusetts, for a few years after graduation while thinking about his career choices. Finally he decided his talents were best suited toward becoming a lawyer; that was where he could do the most good in the world. Despite going against his father’s wishes, Adams knew what he had to do, and he and his father kept a strong positive relationship.

1. Don’t Be Swayed by Popularity

Sometimes Adams stuck to his beliefs even when he faced fierce opposition from members of his own political party. During the period where it looked like the United States was about to go to war with France, Adams refused to believe that peace was impossible. Instead, he sent ambassadors to France, and eventually the two countries once again became allies. He didn’t listen to the more popular view that war was necessary. Sometimes the popular thing may not be the best thing for a businessman. Decisions based on popularity are not necessarily the correct ones.

2. Learn from Those Who Came Before

John Adams was inspired by the example of his puritan ancestors. He considered the puritans to be the heroes who pioneered the American spirit long before anyone thought about gaining independence from Britain. He felt a need to live up to the legacy that they had left him, and that was part of what motivated him later in life to stand up for the American cause. You can do like Adams did and be inspired like he was by studying great leaders in business. That’s why this book was written—to help people like you learn from some of the best examples in history.

When his father wanted him to go into the clergy and become a minister, John Adams had his own ideas. He respected his father’s wishes and later wrote highly of his father, but he chose to go his own way and become a lawyer, a profession in which he excelled and which gave him the opportunities to contribute to history. No one knows your talents better than you do, and it is you who should have the last say in where your talents can be put to the best use.

4. Give Everyone a Chance

In colonial America, when the British soldiers fired into a crowd of civilians and killed five of them, there weren’t many who wanted to defend the British in court. In fact, there was no one but John Adams. Even though he was paid only enough for a pair of shoes, he still pled their case in court and allowed for the soldiers to get a fair trial. You may see a great quality in a prospective employee that nobody else sees; you should give that person a chance. You may see an investment opportunity that others miss; go for it. If you look only where others look, you may miss a lot of wonderful things.

Thomas Jefferson and John Adams had a unique friendship that sometimes included good-natured rivalry. But when Adams lost the presidential election to Jefferson, he had a lot of anger toward his friend for taking what he viewed as rightfully his. Later, though, a mutual friend advised both of them to patch things up, and that’s what they died. Adams’s last words were about Jefferson.

Business can be a difficult field and sometimes hard times put strain on relationships. Good friendships can suffer when one person believes another has done wrong. Don’t let a few arguments destroy businesses, partnerships, or—perhaps most importantly—friendships.

Adams’s list of educational accomplishments is impressive. He attended Harvard College for years to get his undergraduate and graduate degrees. He studied law with a leading lawyer in the area. If an education is available, take advantage of it. If it seems far-off, work hard. It may be easier said than done, but many great men have seen what they wanted and have done everything they could to achieve it.