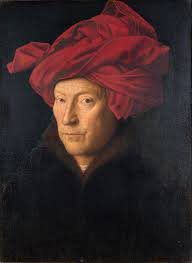 Jan van Eyck was born around 1390 in the town of Maaseik in what is now Belgium. No official record of his birth date or birth places exists and little is known of his early life. He is linked to Hubert van Eyck and Lambert van Eyck; they are believed to be brothers as they were all born in the same area. Jan van Eyck was an educated man, although the details of his schooling are unknown. He most likely received a classical education as was the practice for learned men of his time. This is supported by his use of the Greek and Hebrew alphabet in inscriptions in his paintings. An inscription of a coat of arms on his tombstone indicates that he was a member of the gentry class, a fact that further supports his education.

The earliest record of his life is a recording of payments made to Master Jan the Painter by the court of John of Bavaria of The Hague in 1422. These records indicate that he was assigned an assistant and by 1424 had acquired a second assistant. After the death of his patron in 1425, van Eyck was appointed to the court of Philip the Good where he served as both artist and diplomat.

When working in business, having a solid reputation for honesty and integrity is integral to success. Van Eyck was a successful artist, in part because he embraced the idea of doing his very best work, regardless of the subject or the client. He chose a personal motto, “As I Can” and signed his work with it. His work became synonymous with his motto and helped spread his reputation throughout Europe. Van Eyck’s choice of motto should be considered as well. He chose words that invoked a positive image in the mind of those viewing his works.

Modern businessmen and women should consider van Eyck’s model as they are starting their careers. A strong personal motto becomes the code by which they conduct themselves. Business leaders with a personal motto gain confidence as they live and conduct business by that motto. This confidence, in turn, allows them to grow their business and develop their young employees into effective, productive workers.

Van Eyck worked with many different people over his lifetime. He was known for treating the people who sat for portraits with dignity and respect. He depicted them and all their flaws realistically, but the subjects of his paintings have a quiet dignity in their appearance as well. He was commissioned by Philip the Good to paint a series of portraits of Princess Isabella of Portugal. Philip was to marry the princess and the portraits were to give him an idea of his bride to be. It is stated in historical documents that Isabella was not the most beautiful of women, yet she has a gentle dignity and character that is appealing to the viewer. In business, it is important to treat people with respect. No one likes to be shown the less flattering facets of their personality. There are times that a business person must “grin and bear it” even though he’d much rather speak exactly what is on his mind. Sooner or later, all businessmen and women must deal with difficult situations and unpleasant people. Those who can negotiate, compromise and sooth troubled waters are much more successful and valuable to their companies than those who fail at these things.

Treat everyone with respect, regardless of position. It is not always the person whose name is on the door that wields the greatest power. Positions of power are found at all levels of business. If a leader’s assistant is treated badly by someone, the person responsible for the disrespect may find him or herself struggling for contact with the boss. Administrative assistants, secretaries and other support personnel are the gatekeepers for busy leaders. Being nice to these people and treating them with respect goes a long way to gaining you access to the top leaders in business.

3. Keep a Sense of Humor

When building a business, there are going to be days when it seems the world is against you. Sometimes things just won’t work out the way you want, in spite of your best efforts and hardest work. On those days, sometimes the only thing you can do is laugh at the situation. Van Eyck maintained a sense of humor in his work by creating fictional scenes outside the main body of his artwork and showing them in reflective surfaces such as mirrors, windows and polished armor. He often inserted himself in these reflective images, reminding the viewers of his work that the painting is the fiction and there is a larger world outside the boundaries of the frame. In business, it is important to keep this lesson in mind. One bad day does not mean that the business is a failure, you are a loser or your ideas are worthless. It is simply a bad day. The successful business person is the one that can examine the bad day in perspective and walk away with a lesson to do things differently. He or she remembers that business is primarily about dealing with other people and any time they are dealing with people things don’t always go according to their plan. These people are the ones that can shake off a bad day with a laugh and then get back to work with their sense of self intact.

4. Do Your Very Best Work

It is sometimes tempting to take shortcuts, especially in business. People get complacent when they are not challenged, when they have had a string of successes or when mediocrity has become an acceptable standard. Under these conditions, it can be very difficult to maintain a personal standard of excellence. Van Eyck was a very successful artist. He drew a salary that was almost unheard of for his time. He was proclaimed as the inventor of oil painting, even though the technique and the medium had been used by other artists before him. He did not let these accolades inflate his ego, but rather, they drove him to continue developing and growing as an artist.

Modern business persons can learn much from this example. In today’s competitive business world, you are only as good as your latest work. Company owners don’t care what you did for their competitors; they care about what you are doing for them. Doing your best work every time builds your reputation as a reliable, dependable person. As your reputation grows, so will your responsibilities and value to the company. Businesses are built on their ability to get work done. The ability to get work done is dependent on the ability of the employees and the leaders of the business to do the very best work possible.

5. Be Innovative in Your Thinking

Jan van Eyck was credited with inventing painting with oil paint. This is a myth. Van Eyck pioneered new and different techniques for mixing the pigments with oil such as linseed oil to produce paints with a consistent transluceny and drying time. He then pushed the boundaries of the medium, creating paintings that seemed to glow with an inner light. He studied the play of light on his subjects and applied it with great realistic detail. Van Eyck was innovative in the staging of his subjects in his paintings. He created miniature scenes that originated in the real world from the viewer’s perspective. He depicted these scenes as reflections cast back at the viewer. Van Eyck’s unique style and unparalleled skill at manipulating paint and scene made his work highly desireable throughout Europe. In business, innovative thinking is critical to growth and success. Innovative thinkers are in touch with market trends and technological advances. They understand the forces that influence business and how to position their companies to take advantage of these forces.

Innovative thinkers anticipate changes and steer their companies through them. This strategy allows the company to stay in business. A good example of this is the case of Borders book stores. Borders and their major competitor, Barnes and Noble (B&N) book store were the top two chain stores in the US in the mid to late 1990s. In 1998, the first e-reader was released. It was somewhat of a novelty item and didn’t capture much attention initially. The public was initially slow to embrace the e-reader until Sony launched the Librie in 2004, the first e-reader to use electronic ink technology. This technology eliminated the back lighting glare that plagued earlier generations of e-readers. In 2007, Amazon released the Kindle. The first lot of Kindles sold out in less than six hours. The Kindle revolutionized e-books and book sales in the United States. Borders continued to develop bricks and mortar stores, opening new stores across the US in the late 90s and early 2000s. Barnes and Noble began work on developing their own version of an e-reader. The Nook was released in 2009. In 2009, Borders was closing stores across the US. B&N is still in business, selling e-books and print books while Borders closed its doors for good in 2011.

Business leaders would do well to study Borders and B&N. One company ignored market trends and continued with an outdated market plan. The other responded to shifts in the market, including digital delivery of media like music and video and developing a competitor to emerging technology. One company went bankrupt and ultimately closed its doors; the other is still in business and offering a unique market niche. Walk into any B&N store and you are greeted by a row of artfully displayed Nooks complete with designer cases just waiting to be purchased. New Nook owners have customer service representatives standing by, waiting to help those new owners get started. B&N’s approach to technology with a human touch is an excellent example of innovative thinking in response to market changes.