Insects - What We Can Learn from a Tarantula 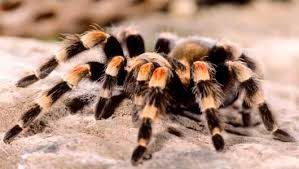 One of the scariest spiders is the tarantula due to its large size and hairy exterior, but they aren't that dangerous and we can learn a few things from them.

Tarantulas are large, hairy arachnids that only attack humans or large animals if they feel threatened. The characteristic hair that covers a tarantula is actually setae, a large amount of tiny, hair-like organs that keep the tarantula in constant contact with its surroundings. They do have eight eyes, but they are very basic and can only distinguish light and detect motion. A tarantula’s eyes cannot form images. Tarantulas contain two types of blood called hemocyanin and hemolymph, the former being a copper-based blood that circulates oxygen through the tarantula’s body and the latter being the blood that keeps its heart pumping. The tarantula’s exoskeleton is fairly fragile and if it is broken through a fall or an attack and enough hemolymph leaks out, the tarantula will die. Tarantulas also have two sets of lungs that are divided like the pages of a book. Air enters these lungs through little slits on the tarantula’s abdomen. Unlike most arachnids, tarantulas are largely ground-dwellers, living in burrows that they’ve dug themselves or taken from another creature. Like most arachnids, however, they will spin webs in order to tell when a potential meal has wandered too close to the mouth of their burrow. A tarantula can produce silk from its spinneret, which is on the abdomen, or from the bottom of its feet. Tarantulas are carnivores and usually eat insects, although there are some species that will eat frogs, mice, or even birds. The tarantula’s defense mechanisms include making itself appear bigger, flicking urticating hairs, and stridulation. It makes itself appear bigger by standing up on its back legs while waving its front legs around. If this doesn’t work, a New World tarantula will use its legs to rub off and fling its stinging urticating hairs into the potential attacker’s nose and eyes. If making itself look bigger doesn’t work for an Old World tarantula, it will repeatedly strike the ground in front of it while making a stridulation noise in the hopes of scaring off the potential attacker. If neither of these methods work, a tarantula will bite the attacker. While its bite is venomous, it contains less-potent venom than that of a honeybee and will not kill the person or animal it has bitten.

A tarantula will wait in its burrow until a potential meal wanders by and is close enough to grab. When it has grasped its prey, the tarantula will inject it with venom that both paralyzes the victim as well as liquefies its insides. After a time, the spider will suck out all the liquefied nutrients from the prey’s body. The tarantula has found the quickest, most effective way to get the nutrients it needs from other creatures. It could waste its time and energy fighting a struggling victim, but instead it just paralyzes it. It could eat the entire insect (or mouse or frog), but instead it just takes what it needs and leaves the rest. Likewise, take a good look at your working processes and make sure that you’re doing things in the quickest, most effective way possible. Go through proper channels when necessary, but if at all possible pare down your work routine so that you’re getting maximum results for minimal effort.

Tarantulas are fairly tough creatures, but a long enough fall can crack their delicate exoskeletons and kill them. Most tarantulas have special silk-producing mechanisms in their feet and the silk helps them more firmly grasp onto smooth surfaces. Even with this mechanism, most tarantulas prefer not to risk falling and spend their entire lives on the ground. It is necessary to take risks in business, but be as smart as you can when you do. Shore up assets to make sure that losses aren’t permanently damaging if your gamble doesn’t pay off. You may survive the fall, but you may not. Don’t risk more than it’s worth.

3. Only Bite as a Last Resort

While they look scary, tarantulas will never bite an attacker unless it’s a last resort. Their real first line of defense is avoiding confrontation entirely—they spend most of their time on the ground or in their burrows, away from potential threats. If they are confronted by someone or something that might do harm, the tarantula will warn them off by appearing to be bigger than it really is or by flicking irritating spines into the attacker’s eyes and nose. If the potential attacker still persists after the tarantula has gone through all these steps, then the tarantula will bite it. There are going to be problems and conflicts in business. The best way to handle conflicts is to head them off entirely through good communication. If that doesn’t work, give the offending party plenty of warnings. Only fire or terminate contact with someone after they’ve shown no inclinations to stop their problematic behavior.

Although they are preyed upon by some birds and mammals, the tarantula’s most worthy foe is the parasitoid wasp. The wasp will paralyze the tarantula and then lay its eggs in the tarantula’s body. The newly-hatched wasp larvae will then devour the tarantula’s still-alive body. It is a horrible way to die. There are parasites in the workplace—people who take everything and give nothing. They will attach themselves to a project, contribute nothing, and then take all the credit. Avoid parasitic people at all costs.

Because tarantulas are so slow, they prefer to wait for meals to come to them. They will wait in their burrows for hours or days, waiting for a suitable creature to come along. A tarantula can be sustained for an entire month on one single meal. The tarantula is incredibly patient. Patience is a virtue of life in general, but especially in the business world. While it is always a good idea to get your company out there via advertising and taking yourself to your customer, there are methods of making business come to you, but they require great patience. Although you might have a great product or service, it may take a while for potential customers and investors to hear about you. Be patient and have faith in your company’s ability to succeed.

Although it has eight eyes, they can barely distinguish light from dark and trace the most basic motion. The tarantula depends on its setae to let it know what’s going on around in its environment. The setae sense vibrations, wind, and even scents. An animal’s appearance will not always tell a tarantula whether it is predator or prey—instead, the tarantula relies on the information it receives from its setae to tell what sort of creature it is. In the vein of appearances being misleading, tarantulas can look terrifying, but they are essentially harmless if left alone. Similarly, don’t just depend on one source of information to tell you what’s happening. Have employees do self-evaluations about their work as well as evaluating them for yourself. There might be something you aren’t seeing.

7. Watch Out for Hungry Partners

Female and male tarantulas need each other to copulate and propagate their species, but as soon as the act is done, the female will sometimes eat the male. This doesn’t happen often, but it happens often enough for male spiders to be wary of their mates. In business you might pair up with an employee or company that seems to have the same goal as you. However, be on the lookout for signs that your partner might turn on you as soon as they get what they want. It is rare, but if you are too naïve, it could cost you dearly.