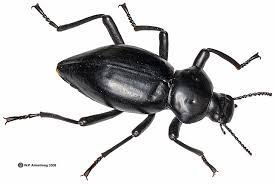 Beetles are in the insect order of Coleoptera, which is the largest order of insects. Forty percent of all insects are beetles. In fact, beetles make up almost 25 percent of all existing animal life. There are more than 350,000 species of beetles worldwide, and possibly more if you factor in species that are not yet discovered. These are divided into 4 basic subgroups – Archostemata, which are wood boring ‘telephone-pole’ beetles and reticulated beetles, which have a distinct pattern of squares on their outer shell; Adephaga, which are bark beetles, ground beetles and most types of water beetles; Myxophaga, which are bog and skiff beetles, and Polyphaga, which are water scavenger beetles, carrion beetles, stag beetles, and all other kinds of beetles.

The largest known species of beetle, the Titanus Giganteus beetle, is native to South America. It is a member of the Polyphaga suborder in the family Cerambycidae, a group known as longhorn beetles. The Titan beetle can grow to be over 6 inches long, while the smallest known beetles can be as small as 1 millimeter in length. Beetles come in a wide variety of sizes, shapes, and colors, and can be found anywhere that plant life will grow. This includes in all parts of the world except for the polar regions and salt water habitats.

All beetles, like other insects, have three main body segments – head, thorax, and abdomen. Beetles are covered with a hard exoskeleton and most beetles have wings, except for ground beetles and some types of cave dwelling beetles. Beetles do not have lungs or breathe through their mouths like mammals, but they breathe through tiny pores in their abdomen called spiracles.

Nearly all beetles have two pairs of wings – a pair of transparent flight wings, which they keep folded up underneath a hard shell-like pair of wings called elytra that protect the beetle’s inner wings and body. Even species of beetles that have adapted to become flightless have this hard outer shell, even though it may be fused together into one hard plate of body armor.

A beetle’s hard exoskeleton is made up of several armored plates called sclerites. Even though these plates are rigid, because there are several plates and not one solid piece, this gives beetles the flexibility that they need to move around, while keeping them protected from predators. Without this hard shell, beetles could be easily crushed by predators. This hard shell also protects them from becoming dehydrated. Certain types of beetles trap air or water under their elytra for diving in water or for crossing large stretches of desert.

Beetles are a fascinating group of insects. They are the largest group of insects and are often the ones working hard behind the scenes to get some of the most unpleasant jobs done. Beetles are rarely noticed, but would certainly be missed if they were gone. They are the ones that keep on pushing through, rarely appreciated and often feared. One interesting thing about watching beetles is that even with their hard shell-like exterior, they can still manage to move quite well unless they are unfortunate enough to land upside down. Even though a lot of beetles are black or other earth colors, many kinds of beetles are brightly colored, or even have iridescent colors that can be quite beautiful. Some types of beetles are even used as jewelry.

There are many things that business people can learn from beetles. Beetles are mostly harmless, but when we see one, at first glance it is often their very appearance that gets our attention. They are well prepared to defend themselves, either with horned noses or large pinching jaws, or even nasty smelling and sometimes caustic sprays. Beetles can be very picky eaters and usually target one type of food, sometimes plants, but often decaying debris and other nasty things that people don’t like to acknowledge, but this trait alone makes them an invaluable part of our world.

Beetles often look far more threatening than they are dangerous. Because of this, they are often left alone. Birds are less likely to want to eat a beetle that looks dangerous than they are another kind of insect. Even though beetles often look threatening, most of them are pretty harmless, but their imposing look helps them survive. In business, a person doesn’t need to look intimidating, but the key here is not intimidation as much as it is appearance – if you look the part, other people take you far more seriously. In business, appearance often has a lot to do with how a business person is perceived, and first impressions are important. Looking the part can add to a business’s credibility. This doesn’t mean that all business people should wear skirts or suits, but it means that business people should dress according to the type of business they provide. In an attorney’s office, most likely the dress would be business professional, but a river rafting guide wearing a suit and tie out on the river would likely give clients doubts as to whether or not their guide was familiar with rafting. In his office, dress would likely be business casual, while out in the river, cutoffs and a t-shirt would be more appropriate.

2. The best offense is a great defense

Beetles are especially equipped to defend themselves – so much that many predators do not even bother with them. Large ‘horns,’ strong mouthparts, and strong legs make the stag beetle a formidable competitor to other beetles and a fierce enemy. Most predators and competitors either stay out of its way or come prepared to fight. In business, the best defense isn’t necessarily battle and intimidation as it is in the insect world, but if a business person is prepared for trouble, then when it comes along, they will be much better equipped to deal with it effectively. The business world is very competitive and unfortunately there are those who are willing to play dirty to get ahead at the expense of others. It isn’t uncommon for a business owner to be sued at least once, often over trivial matters. In addition to making sure that clients are being taken care of and are being kept happy, business people can prepare for this by having all of their legal paperwork in order, by keeping a good working relationship with an attorney, and by making sure that they stay on top of regulatory issues where the law is concerned, especially if they are operating a business where changes in regulation happen regularly.

Beetles often specialize in one diet, eating only a certain type of plant. Some business people make themselves very successful by specializing in one thing. Diversifying is good up to a certain point, but if a business gets too diverse, there can be confusion not only for the business itself, but for clients as well. For example, automobile manufacturers make several different models of cars, but they wouldn’t want to diversify into unrelated areas. If a car manufacturer were to open a bakery, it probably wouldn’t do very well, because the last thing a client would think of would be to go down to the car dealership to get a birthday cake. This doesn’t mean that a paperclip manufacturer should only make paperclips, but it makes a lot more sense if they stay in the general area of office supplies. Specializing makes business more efficient. All processes can be streamlined, costs can be kept to a minimum, and when a job comes in, there is very little variation in the tasks needed to produce the product or service required. The product created is fairly uniform, so the customer usually gets exactly what he expects. Clients who need a specific product will often go directly to a business that sells it.

Some types of beetles are agricultural pests, which has brought them to the attention of farmers or gardeners, while other types of beetles are beneficial to gardens because they prey on insects that can do harm. Beetles that are considered allies are left alone and even encouraged. Gardeners will even buy them and have them shipped to their door so that they can let them loose in their gardens. For example, the ladybug which preys on aphids and other destructive insects is more likely to be encouraged by humans than a bean beetle that eats the leaves off of their tender young plants. In business, it also pays to be an ally, and not a pest. Not just for clients, but to others as well. Many businesses get involved in the community though volunteer work and making donations. There can be a fine line between being an ally and a pest. When a business gets involved in civic engagement for the sake of bettering the community and not just to look good for clients, people can tell. Businesses who are actively involved in helping to make the community a better place for everyone, and are not just doing it to look good and bring in more business, actually get more business from customers who are more loyal to them as a result.

5. Someone has to do the dirty jobs

Most beetles are in the nasty business of cleaning up carrion, decaying material, and waste. They do the jobs that no one else would want to do, and they do it quickly and efficiently in the background so that they are barely even noticed. But when they are not there, people do notice. When more farm animals were first being brought to Australia, for example, the local dung beetles were very discerning about what wastes they wanted to clean up. They preferred kangaroo scat to cow manure, so after a while the manure was starting to pile up. Without beetles, manure takes a long time to decompose. Eventually Australian officials imported several other varieties of dung beetles to clean up after the imported livestock, and once they did the problem took care of itself. Many good businesses can thrive by taking on services that need to be done, but no one wants to do themselves. Many types of services that involve hard work or getting dirty, like hauling away old junk, waste management, disaster cleanup, and yard work are examples of necessary services that have made great businesses for people who were willing to do the work. The idea that these kinds of jobs are only for the uneducated who can’t get work doing something better is also a misconception. People who provide these types of services often make very good money and live better than some people in more ‘respectable’ lines of work.

Beetles have hard protective plates, but because they are separated into small pieces, like body armor, beetles are flexible enough to move about without any trouble. In business, it is important to stay flexible as well. Things can change very quickly and rigid practices can put even the most well-known businesses out of work. Graphic design is one example of a quickly changing field. It wasn’t really very long ago that all graphic design work was done by hand. When computers came along, at first they were very limited in what they could do, and most design shops didn’t have equipment that was capable of the kind of output to matched hand drawn work. That changed quickly, however, and design shops that took the time to learn to use the new technology even when it didn’t look like it would have much influence on the design field, are the ones who came out on top. When computers could finally match the quality of hand drawn work, it was a lot faster and cheaper to produce high quality design work, and shops who were still doing everything by hand had trouble competing and eventually went out of business.