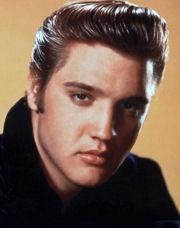 On this day, July 2, in 1956, Elvis Presley recorded "Hound Dog" and "Don't Be Cruel". Not surprisingly, Elvis was not know for his business acumen, but there are a few business lessons we can learn from him.

Elvis was another performer who started life during the Great Depression. He also had A Voice – although most people didn’t like the way he used it very much. The most telling part of his story is that he was basically a shy person, not one to push himself forward but almost always ready if someone asked. Thankfully, someone almost always asked.

Elvis sang for the first time with the encouragement of teachers who saw him as “average”. No one is going to put forward another person unless they are certain to shine in the reflected light. Elvis could sing. He was encouraged to sing. And he sang. The pattern in business is to learn what someone is good at, what they enjoy doing and then giving them a job to do that reflects both those attributes. Make the proper accommodations when necessary and then stand back and let the person “have at it”. Provide the proper tools and get the job done properly.

I often wonder if anyone has counted the number of times Elvis was told that he couldn’t sing; that he shouldn’t “quit his day job”? Fortunately he didn’t listen. He hadn’t wanted a guitar for a birthday present but once he had it, he used it. He loved music: loved to listen, loved to play, loved to sing. When his eighth-grade teacher told him that he had no aptitude for music, Elvis didn’t listen. That criticism was incomplete – Elvis could sing, he just needed to hone his skill. Even with a perfect ear it is difficult to carry a tune if one doesn’t know the song. Skills need to be practiced, just like talent. Someone who is good with computer can be an asset to a business but maybe not if they don’t know what the business needs done on the computer. Relegating them to a job that doesn’t use computers is a waste – teach them how to translate their natural talent to your business needs. It’s a win-win situation.

Vernon Presley wasn’t the best role model a child could have. He was shiftless and not opposed to finding a shortcut which led nowhere except to jail. The family moved a lot making it difficult for the Elvis to make any lasting friends. Perhaps this is why Elvis was so close to his mother – she was the only person who was always there. It may not be the business that has to relocate but it may be changes in the surrounding neighborhood that requires business adaptation. In today’s global economy and unstable third world governments, the person you dealt with yesterday might not be there tomorrow. A good business plan will keep the company on-track through the ups and downs. Elvis played that childhood guitar until 1954 – long after he had physically outgrown it – because it still worked for him. Using the proper and familiar tools goes a long way toward success in the business world. Most obstacles are of our own making. Recognizing them and removing them, working with them or working around them helps to turn them into stepping stones; which can then be used as paving stones, building the pathway to success.

As mentioned previously it wasn’t that Elvis couldn’t sing it was that he didn’t sing or behave the way people expected. There was still a major separation among the musical genres as he was growing up. Music was “ours” or “theirs” – with the emphasis being placed by the speaker. Elvis sang what he wanted to sing without regard to the genre. And then he “danced” – and the girls went nuts! No one knew that his initial movement was because he was uncomfortable – it was actually a nervous twitch! But it worked, so he stuck with it. Do your ideas work? Are they the same that everyone else has? Does that matter? Dare to be different. That’s what got man out of the caves. That’s what gave us the wheel and the printing press -and the airplane and the computer. If you’re only going to do what has already been done you may as well quit while you’re ahead. If you’re going to spend money on an idea make it a worthwhile idea – even if it’s different. Especially if it’s different.

Elvis’ family moved around. He worked odd jobs. He played in different venues for short periods of time. He bought a house for himself and his parents. He became famous, lost his mother, got drafted, got married, became a father. At the root of it all was the music. He listened, he learned, he performed. It was always about the music. There was a time, during the seventies when a computer programmer’s dream was to come up with an application that Microsoft would want to buy. Find out what you’re good at and enjoy doing; then go out and do it. Do that one thing until the you ar great at it, better than anyone else. Don't get distracted from what makes you great.