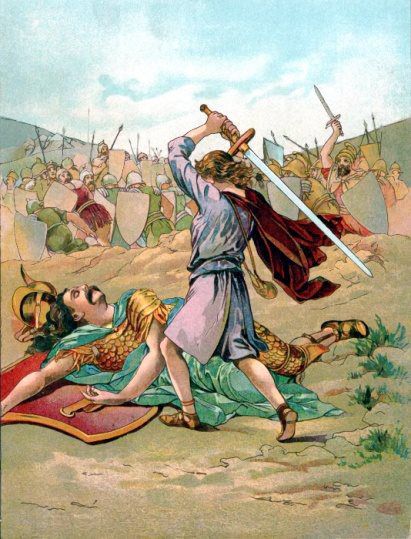 David was one of the greatest hero of ancient times with tales of conquering giants and nations and providing a great example of leadership that we can follow today.

One of the most well-known biblical stories is that of David and Goliath. Goliath was a large Philistine who taunted and challenged the Israelite army. Through faith David, as a young boy, was able to defeat Goliath with a sling and smooth stones. The challenges you face as a business owner may seem like Goliath challenging your success. Other businesses may be bigger and more established than yours. They may look threatening. Remember David’s example; it took a good aim and small stones to defeat Goliath. You simply need to do small things that offer things which are different than your competitors and have a good aim at your target market for those who value those qualities.

David went after a woman, named Bathsheba, whose husband was in battle. When she became pregnant he called her husband back from war, in an attempt to cover up his actions. Her husband’s loyalty to the king kept him from returning to his wife while others were at war. Eventually David had the husband, Uriah, placed in the front lines of a heated battle where he was killed. We learn the importance of taking responsibility for one’s action rather than avoiding consequences. King David had several opportunities to take responsibility for his actions, but he continually decided to try to cover them. When things go wrong we can learn from David that when we try to cover things up instead of taking responsibility, we end up hitting a dead end. Take responsibility for your business decisions.

Early in King David’s life he was a successful military leader. His continual success gained him admiration among the kingdom. Highlight your successes. One of the greatest selling points is having testimonials of satisfied users of your product or service. It is good to be able to have a record of achievements, but it is even better when others are able to list off your qualities.

Two of the things we often hear about King David are his battle with Goliath and Bathsheba. We can learn how fragile reputations can be. There have been many examples of businesses who have, in an instance of doing the wrong thing, have lost a long built reputation. Make sure to pay attention to the small things and make sure you don’t shy away from quality. Make sure all employees understand company standards and laws that affect the company.