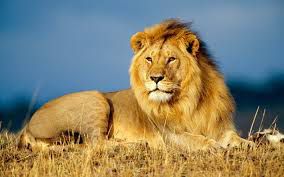 With their distinctive manes and social groups known as “prides,” lions are among the most recognizable animals on the planet. They are the second biggest cat after tigers, weighing around 500 pounds. Lions are primarily found in African Savannah regions, but can also be found in Asia in small numbers. Male lions are particularly distinctive across all genetic variations of lions, with their thick manes, which allow the males to appear larger than they really are—though if a 500 pound lion leapt out at you, it wouldn’t matter if he looked larger or not; it’s going to hurt.

Lions are distinctive among cats for many reasons, and one of the biggest ones is that lions are unusually social. While many cats, such as the snow leopard, tigers, jaguars, and cougars tend to be loners, lions generally are not. Their family groups, known as prides, ensure the health, safety, and survival of each member. Prides generally consist of related females and a dominant male, though related males will often accompany the same pride. Males are aggressive, dominating, and dangerous to others. They can weigh up to 500 pounds and be around 8 feet long from tip of nose to tip of tail. Lions are among one of the only cats to display dimorphism between males and females, i.e. they appear differently. Females lack the signature mane of the males, but they are no less impressive for size; smaller than the male, the female still can weigh around 400 pounds and measure up to 6.5 feet long. Females act as a group, sticking together on hunts and in raising cubs.

Within lion social groups, a hierarchy is formed, wherein the females submit to usually one dominant male. These residents of the pride act as a distinct family unit, hunting, sleeping, playing, and protecting one another. If a lion finds itself outside of a pride, be it a female run out or a male bested in a fight for dominance, the lion becomes a nomadic ranger. Ranging males may find new prides to attempt to conquer, though fights for dominance between males rarely leaves two survivors. Female nomads find life to be very difficult without the protection of the pride. Lions can run up to 35 miles per hour and can deliver very swift, powerful attacks, but since they work best as a group, single lions find hunting and protection to be difficult alone.Lions are among the most recognizable animals in the world, tawny-coats, long teeth, moving in prides, and males sporting their signature manes. Unlike most big cats, lions uniquely form large family groups wherein each member has a function, or several functions.

Females do most of the hunting, though males will at times participate. Lionesses develop distinct hunting formations when targeting prey and work together to bring down even heavy, large prey. The males watch over the cubs while the females hunt and get the first turn at eating prey. Lions are opportunistic, avoiding hunting in the heat if they can and will often take carrion if it can be won from another predator, or even, in heavily-human populated areas that intersect with lion habitat, have been known to take livestock or even human victims. Social life among lions is complex and important; the survival of the lion oftentimes depends on involvement in a pride, though males often turn nomadic and attempt to win dominance in new prides. Lion fights are violent and often leave only one injured survivor. Long associated with royalty and power, lions truly are majestic and powerful animals. You know you have done something right when the only thing that can really kill you better than your own kind are crocodiles.

Lionesses take on specific roles in the hunt. There are the “wings” or the lionesses that fan out and attempt to take animals straying from their herds, and there are the “centers”, lionesses that hang back a little bit in the center, whose job it is to catch the prey that the wing hunters send their way. In any case, a hunt is planned, and its success depends greatly upon that plan. If the team does not act as one, according to a prescribed set of instructions and actions, the hunt will fail. Similarly, in business, if there is no plan, all there is, is a harried scurrying from place to place or objective to objective with no order and no coordination, and that inevitably is going to end up in a heap. Truly successful business ventures have clearly defined goals, as well as clearly-defined plans, or steps, to achieve those goals. An objective without a goal is a lone lioness trying to take down the fast and strong wildebeest; generally, that is not going to end well for the lioness, nor would a similar situation in business end well for the business-owner. At the very least, there would be a great deal of stress-management that would need to happen when a good plan would make that unnecessary in the first place.

Lions all take equal share in the activities of the pride. Whether its mating, feeding and tending cubs, hunting, or protection, the pride follows orders of the dominant male, who can’t do everything at once. Though actual delegation is a purely human trait, lions demonstrate what good teamwork looks like. Though conflicts can and do arise and must be dealt with, lions have prescribed duties and responsibilities. Though the male is larger and stronger than the females in his pride, he relies on their hunting skills while he tends the young to bring in food for the whole pride. A male is able to take a kill on his own, but then his life could be forfeit should the hunt turn ugly, which leaves his pride in a lurch. Similarly, females expect the male to be their protection against other males. In business, the boss and/or owner cannot and should not do everything alone. He or she must employ reliable workers and be comfortable with delegating responsibilities to them. A business cannot thrive if its owners or managers are too busy doing everything themselves, so learn to delegate.

Though lions arguably do not communicate in all the same ways that humans do, they nevertheless communicate clearly with one another. Family groups and prides nuzzle, cuddle, and even pair off at times in highly socially functional relationships. These relationships and sociality among the lions produces strong and everlasting bonds between the animals, which then serves them as they engage in hunting and protection of young. Prides that meet up often meet with conflict, but sometimes lions from other prides may join a new pride and each pride perhaps could be the stronger for it. In business, if one does not socialize beyond a narrow pool of people, the pool can become stale and stop producing the results of socializing and interacting. Businesses thrive on networking, indeed it can be the lifeblood of a business. Networking and socializing not only can produce further clients, partners, or even employees, but it can also allow for new brain power to assess the direction of the business and provide assistance as needed. New blood in a lion pride helps maintain genetic diversity, new minds in business provides an idea diversity that is often sorely needed.

4) Look before you leap.

Lions are not animals that necessarily enjoy swimming, though they will indulge now and then—provided that they do not get snatched under by crocodiles before they can leave the water. Even a seemingly peaceful drink at the local watering hole can prove disastrous for the careless lion. Similarly, though business is exciting, as is networking and finding new customers, looking before you leap can save you a lot of trouble. Watching carefully what people say, where they come from, and what they do can hint to you their real intentions with your business. If you are keeping your business’s best interests in mind, you must not lose sight of the fact that while networking is lifeblood to business, occasionally that stream of lifeblood might contain the occasional crocodile or two. Consider every offer very thoroughly and carefully before deciding.

Maybe putting something away for a while is a good way to make it pay you again and again. Lions don’t tend to eat their kills right away upon first catching them; they often will drag them to a new location and guard them for a while before eating. This allows for more of the pride to partake and ultimately for more food to be consumed in the end, as the pride will be able to eat their share and return later for more. When receiving a boon of some kind, perhaps rather than using it right away, that boon should be saved against a time of hunger or starvation, allowing it to keep paying, keep providing, and when the time is right, indulge, for the good of the business. It’s the ace up the sleeve, or the giant kill being watched over by two maned males, roaring for a fight.

6) Between employee and employer, openness, communication, and a mutual reliance is essential for success.

Nothing is worse to an employee than to have a tyrannical boss, whether it be a tyranny in favor of doing everything themselves or micromanaging. Nothing is worse to an employer than to have an employee who doesn’t fess up, who hides mistakes, who is not on the same page as everyone else. Lions openly communicate with one another with social nuzzling and cues so that there is no mystery as to who has who’s backs, and in open hostility, lions don’t beat around the bush. Prides succeed or fail based upon the reliance had between its members, and peace prevails so long as the dominant male and the females are on the same page. Considering that a pride of lions can be so coordinated as to take down bull elephants, should need arise, this mutual reliance and open communication proves its merit.