Bill Sharman - One of Basketball's Greatest 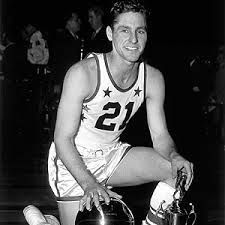 William Walton “Bill” Sharman was an American professional basketball player and coach. He is mostly known for partnering with Bob Cousy on the Boston Celtics in the 1950s in what some consider the greatest backcourt duo of all time. Cousy made the plays, and Sharman who has been called “the greatest shooter of his era,” made the shots. As a coach, Sharman won titles in the ABL, ABA, and NBA, and is credited with introducing the morning shoot around.

Jeff Greenfield suggests that Sharman was the “Golden Boy, the naturally gifted athlete who [was] marked for success in boyhood.” Sharman grew up in the small town of Porterville, California. Upon completing high school, he served in the US Navy during World War II from 1944 to 1946. After the war, Sharman attended the University of Southern California, where he stood out in baseball and basketball. He played 1st base on the 1948 USC Trojan’s College World Series championship team, and in 1950 was selected for the NCAA Men’s Basketball All-Americans. Sharman hovered between the worlds of baseball and basketball until 1955 when he abandoned his aspiration for a baseball career.

The Washington Capitols drafted Sharman in the 2nd round of the 1950 NBA Draft. Following the dissolution of the Capitols, he was selected by the Fort Wayne Pistons in the dispersal draft and was then traded to the Boston Celtics prior to the 1951-52 season. Sharman played for the Celtics for ten seasons, leading the team in scoring between the 1955-56 and 1958-59 seasons and averaging over 20 points per game during three of them.

Sharman saw no limits to what he could achieve. From 1952-53, he was “one of the first NBA guards to push his field-goal percentage above .400”. He led the NBA in free throw percentage a record seven times (including a record five consecutive seasons). In 1994, Los Angeles Times columnist Jim Murray wrote, “Bill Sharman with the basketball at the free throw line was a sports work of art.” “He would go through a brick wall if he felt he could score,” his Celtics teammates said of him. Sharman still holds the record for consecutive free throws in the playoffs with 56. He was named to the All-NBA First Team from 1956 through 1959, and was an All-NBA Second Team member in 1953, 1955, and 1960. Sharman played in eight NBA All-Star games, scoring in double figures in seven of them. He was named the 1955 NBA All-Star Game MVP after scoring ten of his fifteen points in the fourth quarter. Sharman still holds the NBA All-Star Game record for field goals attempted in a quarter with 12.

After his NBA playing career ended in 1961, Sharman turned to coaching. He took the Cleveland Pipers of the American Basketball League to the league championship in 1962. He then went on to coach Los Angeles State (now California State, Los Angeles) for two seasons. In 1970–71, he coached the Utah Stars to an ABA title and was a co-recipient of the ABA Coach of the Year honors. After resigning as coach for the Utah Stars, Sharman signed a contract to coach the Los Angeles Lakers. The following season he guided the Wilt Chamberlain and Jerry West-led Los Angeles Lakers to an NBA record 33 game win streak, a then-record 69-13 win-loss mark, the first Lakers championship in Los Angeles and the first for the team in more than a decade. That season, Sharman was named NBA Coach of the Year. He is one of two men to win NBA and ABA championships as a coach. Here are some business lessons from Bill Sharman.

Bill Sharman was naturally gifted at several sports. But, though he was great at baseball as well, Sharman chose to pursue a professional career in basketball because he realized he was better at it than baseball.

2. Do what you love always.

Sharman loved the sport of basketball so much that within a year of retiring from the NBA he was back in the action as a coach. While he was not the one making the plays, Sharman was inducted into the Hall of Fame again because of his excellence in coaching. Whatever role you play, give it your all and you will be recognized for it.

Sharman coached several teams and wrote two books so he could share his basketball expertise with others.

4. On game day, do everything you can to put yourself in the right frame of mind.

Sharman invented the morning shootaround so that his players would dispel some of their nerves and be mentally prepared for the game.

5. Be determined to win.

Greenfield writes that “by beating the untrustworthy impulses of the body and mind into submission” through endless repetition, Sharman made the most of himself.