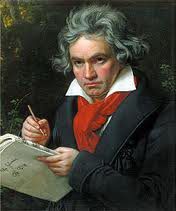 Beethoven was not known for his business skills, but that doesn’t mean we can’t learn some things about business from him:

1. Put yourself in front of the right people

Beethoven’s father gave him his musical foundation as a child. At age 10 he studied under Christian Gottlob Neefewho introduced him to Bach. The court, in which he studied, sent him to Vienna to “study with Mozart.”

Mozart remarked, “keep your eyes on him; some day he will give the world something to talk about.” After Mozart passed away Beethoven studied under Haydn and Antonio Salieri. Soon after he made his first &ld...