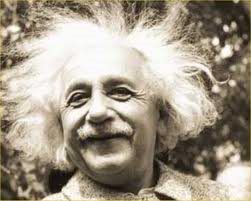 Einstein was clearly a genius beyond his time. What can businesses learn from his approach to life:

1. If at first you don’t succeed try it again… a different way

Einstein defined insanity as follows, “Insanity: doing the same thing over and over again and expecting different results.” Though it seems straightforward and simple people neglect this principle often. It is easy to get stubborn or so fixed in the idea that one neglects other possible variables which could lead to different outcomes. Looking at the equation e = mc2 one cannot expect to derive a different value for e if the m and c values remain the same, no matter how passionate you are about it. In business, if things are not going well the best way to ensure that the business continues in its downward progression is to keep on doing exactly what you are doing. Being slow to change in a rapidly changing and ever increasingly competitive world is sometimes referred to as conservative bias.

2. “You have to learn the rules of the game. And then you have to play better than anyone else.”

This is a quote by Einstein. In his world the rules would be the laws of mathematics which are known. The game would be the utilization of these rules to discover the mysteries of the physical world around us; it would be to discover the undiscovered laws which explain the workings of the world. The principle is simple when applying it to business. One must how to run the specific business they are in, the laws, trends, technology and competition. It is not enough to simply know these things, one must also know where they stand in comparison to the standards of each of these categories and put into practice the principles which will allow them to rise above those standards.

3. “Imagination is more important than knowledge. Knowledge is limited. Imagination encircles the world.”

Looking at the life of Einstein, it seems that what he is trying to make clear is that knowledge only gives us the tools. It is imagination that gives us the ideas to apply these tools. A world that puts the value of knowledge above the value of imagination be limited in its innovations. Einstein used his imagination to consider how his knowledge could explain things. This application resulted in the discovery of new knowledge. A business cannot survive simply on the intelligence of the people who run it, it is the imagination, creativity and innovation. The utilization of the imagination leads to competitive advantages by differentiation from competitors.

Einstein did not see his successes as the pinnacles, but rather as lookout points with which he could search for the next highest peak. Or he used one success to lead to another. Successful business people do the same. For example, look at Arm and Hammer baking soda. If they had banked completely on baking soda itself they would have not lasted the way they have. As baking has become more of a hobby than a necessity, in the modern age, they have found ways to utilize its cleaning and odor reducing properties. In the long-term it is important for business owners should seek to make intellectual investments or investments in future ideas instead of simply banking on one winner. They can use their current successes as viewpoints that lead to their next success.

5. The Power of Credibility

Though it may be hard to believe, some of Einstein’s first papers were not accepted by the scientific community. His papers received attention when a well known physicist of the time, Max Planck, took interest in his work and even showed evidences of Einstein’s hypotheses. Businesses can benefit from the use of credible people who support their practices. Has a friend ever influenced your decision to make a purchase? How about a doctor or athlete? So what was the outcome of a credible scientist taking interest in Einstein’s work? He received interest from universities which were eager to consider him for employment. What can be the outcome of the application of this principle for a business owner? An increase in market share.

“Any intelligent fool can make things bigger and more complex… It takes a touch of genius – and a lot of courage to move in the opposite direction.”

“A person who never made a mistake never tried anything new.”

“We cannot solve our problems with the same thinking we used when we created them.”

“To raise new questions, new possibilities, to regard old problems from a new angle, requires creative imagination and marks real advance in science.”