Batman - One of the Greatest Movies 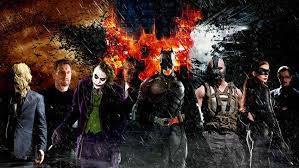 This film series is based on the DC Comics character, Batman. The storyline, written by David Goyer, drew its inspiration mostly from the comic books stories The Man Who Falls, Batman: Year One, and Batman: The Long Halloween. The films were directed by Christopher Nolan and starred Christian Bale as Bruce Wayne. Nolan ultimately chose Bale because, “He ha[d] exactly the balance of darkness and light that we were looking for.” This was important as the actor conceptualized the part in four separate personalities. He wanted to portray the angry Batman persona, along with the shallow playboy, the young man seeking revenge, and the older, more complicated Bruce Wayne trying to find his purpose in life. The first film received critical acclaim and much of its success was attributed to its more realistic and darker tone in contrast to previous Batman films.

The second film in the Batman Trilogy was inspired by the graphic novel entitled The Killing Joke. One of the most notable media stories surrounding the film was the announcement that Heath Ledger, the actor who portrayed the Joker, died from an overdose of prescription drugs, six months before the film’s opening. The sequel was even more commercially and critically successful. All IMAX theater showings of the film were sold out for the opening weekend. It also become the fourth film in history to gross more than one billion worldwide and is currently the sixteenth-highest-grossing film of all time. It was nominated for eight Academy Awards and won the award for Best Sound Editing. Additionally, Ledger was posthumously awarded Best Supporting Actor. The film ranks high on many “greatest movie” lists. In preparing for the film, Ledger spent a month alone in a hotel room trying to perfect his interpretation of his character’s posture, voice and personality. He also kept a character diary, where he recorded fabricated entries intended to be made by his psychopathic murdering character. This film is the first Batman movie that does not include the main character’s name in the title. Director, Chris Nolan, announced that the title was in reference to both the developing hero as well as the fallen “white knight,” Harvey Dent, who becomes the villainous Two-Face in the end.

Here are some business lessons from the Batman movies.

1.Use phrases that are familiar and in the vernacular of your customers

Rachel recognizes Batman because he uses her same phrase. Previously she had encountered Bruce in a moment where he was playing up his rich, young billionaire persona. When he tries to defend himself, saying that there is more to him than what appears in the moment, Rachel quips, “It’s not who you are underneath; it’s what you do that defines you.” Batman uses this same phrase after rescuing her when she asks to know his real identity. This happens a few times throughout the movie as well. For example, when Bruce finally defeats Ra’s Al Ghul he uses the same phrase that his master used to taunt him with; he says that he never learned to mind his surroundings. Finally, Earle fired Fox with the phrase, “Didn’t you get the memo?” Later, when Bruce names him head of Wayne Enterprises and Earle’s plan to buy up all the stock fails, Fox uses the same phrase back to him. This tactic is endearing and memorable. It is the kind of strategy you want to use when making advertisements and slogans. If you speak to your customers in short, memorable and witty ways, they will remember your company and its products.

2. If you are good at something, you shouldn’t do it for free

This statement is one of the sanest things that the Joker says. He makes this comment while speaking to a group of mob bosses. He suggests that they just kill the Batman; if they did this all of their problems would be solved. Obviously the mobsters don’t think that killing the Batman is such a simple task. The Joker, on the other hand, isn’t as cowed. He asserts that he could easily do the job if they are willing to pay him the price. They ask why he hasn’t just already killed the Batman if it is so simple and that is when he responds, “If you are good at something, you shouldn’t do it for free.” This is one of the most basic principles of good business. You must find something that you are good enough at that other people will pay you to do it for them. After that it is just a matter of keeping your skills sharp and raising your prices as you gain experience.

Through the series, one of the biggest businesses is the drug scene. There is obviously a high demand for narcotics and other illegal drugs. The drug lords live ritzy lives with lots of wealth. Some may consider this a smart business move: seeing that there is a demand and rising to meet the demand. Besides the fact that the business is illegal, there are other moral reasons to reconsider such employment. True fulfillment comes from giving consumers what they need, not what they want. It is easy to make a fast buck by fulfilling the whimsical desires of customers, but to maintain a long-lasting business relationship with those that will continue to buy from you it is necessary to sell something that is beneficial.

4. Think about cost reduction instead of invention

It is easy to get caught up in the thrill of seeking to invent something new, something life changing. Often the best products come when someone is finally able to find out how to make the manufacturing and production of some already known and useful product cheaper. Take the Applied Sciences Department at Wayne Enterprises for example. They had invented hundreds of new weapons and defenses for the military, but none were ever put into effective because they were not cost effective. It’s great when new technology and other inventions come about, but only if they are available to the people, only if they are affordable.

Even the Joker has his own calling card. While business cards may seem old fashioned or unimportant in our very digital world, there is something special about a tangible object. People hang on to business cards, just in case they ever need to call. It takes a lot more effort to throw away a physical card than it does to delete an email advertisement. The tangibility of the card literally gives the business more weight, more importance. It feels like throwing away the card would be throwing away the possibility of ever using that business. They are valuable and often stick around much longer than digital means. Printing is very inexpensive now and you can easily create unique cards that will help you stand out from your competitors. This small investment will help get your name out there and will surely bring in customers.