Back to the Future - One of the Greatest Movies 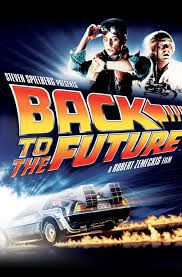 The film opens with the foreshadowing ticking of hundreds of clocks inside Dr. Emmett Brown’s house turned laboratory. Marty McFly is the first character we meet. He is a typical seventeen-year-old who has befriended the strange doctor and enters the home looking for the Doc and his dog. Marty finds the place empty but it greeted with a phone call from the doc. The Doc informs Marty that he has a new invention that he wants to show him and that he needs Marty to meet him at one o’clock in the morning at the local mall parking lot. Mid conversation the barrage of clocks chime eight o’clock. A delighted doctor notes that he has accurately set the clocks to all go off exactly twenty-five minutes late. This remark signals to Marty that he is late for school. He takes off on his skateboard, hitching rides off the back of cars. Before entering the school, he is met by his girlfriend Jennifer who warns him that a school administrator is watching for him in order to hit him with his fourth tardy in a row. Their attempt fails and they both end up with detention slips. The school administrator warns Marty not to keep hanging around with the doctor. He also says that he shouldn’t waste his time auditioning with his band for the school dance since none of the McFlys ever amounted to anything. Here are some business lessons from the movie.

If there is a trait in someone you don’t like, before criticizing them make sure you don’t have it yourself. Often times we get frustrated with our boss or other employees because of something we find annoying. But, in time we come to find out we ourselves are guilty of the same flaw. Marty realizes this when he can relate to his father’s fear of being rejected by Lorraine. George uses the same words as an excuse for being afraid of asking out Lorraine that Marty used when he admitted to Jennifer that he was afraid his music would be rejected.

If you have an idea or a goal go after it. Don’t let anyone or anything tell you that you can’t. This is a major theme in the movie. On a smaller scale we see it in Marty and his dream of becoming a famous musician. George has a more profound issue with his dreams being squashed by his fears. George never lets anyone read his science fiction writings, he lets Biff walk all over him, his family life is deteriorating because of his inability to take action and reclaim his desires. Marty and his music. In contrast to the McFlys’ debilitating dreams replaced by nightmares is the voice of the young black busboy in the 1955 café. He says that someday he is going to make something of himself; he has big dreams and high hopes. Marty recognizes him as the man who is running for reelection of mayor in the 1985 version of the town and sees how this man’s confidence led him to the fulfillment of his dreams.

3. Help those under you become their best selves

As Marty tries to reunite his parents, Marty helps them become their best selves. He gives George confidence and helps him find his way. He teaches his mom that smoking and drinking may be things she would regret later in life. As a result of helping the others around him become their best selves Marty also becomes better and in the end you see the long lasting results as Marty returns to 1985 to find a his parents happily married, his siblings productive and prospering, his dad’s first science fiction novel published, etc. Sometimes the workplace can seem to be too competitive of a place to help others. Sometimes if feels like the only way you can get ahead is to push others down. In reality, the opposite is true. It is as we work together that each person becomes more productive. The positive energy that comes from teamwork leads to unity and increases the capacity of everyone involved.

As you strive to be a positive influence, you must remember that as a teacher, you can’t do others’ work for them. For example, at first, Marty’s attempts to help his father were too much. He did all the work and George just sat back and reaped the benefits, scuttling away and avoiding conflict. This resulted in the opposite effect of what Marty wanted. He wanted his mother to fall for George, but instead he kept unintentionally putting himself in the spotlight and as a result Loraine fell further in love with him instead of George. It is a delicate balance to help people stay afloat without carrying them in your arms. Good training is a crucial part of company growth, but you must teach in a way that encourages independence and creativity or you will gain nothing.

5. Insight into the future can prevent and produce

Because Marty knows what the future hold he is able to prevent the death of the doctor and produce a positive change in his family’s future. Of course we do not have the ability to go back in time and change things and we will never have a concrete knowledge of the future, but we can learn from the past and make sure not to repeat it. We can also use trends and other knowledge to keep things going in the right direction. Some business decisions or events can have far-reaching effects. Make decisions with the future in mind, both the near future and the distant future. Don’t let the promise of a quick profit stunt the growth of a business that could increase its profits exponentially with more time.

6. If you do make it to the top don’t become the person that beats others down

At the end of the movie we see Biff waxing George’s fancy car. George treats Biff in the same condescending manner that Biff used to treat him. It is clear that there is an emphasis on the irony of the role reversal, but it leaves a bitter taste in the audience’s mouth. It would have been more fulfilling if George had been kind to Biff even though he had attained social superiority over him. Unfortunately the movie portrays what sometimes results when businesses achieve notable success. Fortune and fame can negatively impact people who were once humble and kind. As you find success in the business world, it is important to continue to treat competitors with respect. You don’t want to throw away everything you have worked so hard to accomplish by tarnishing your company’s reputation with demeaning comments about other businesses.