Babe Ruth - One of Baseball's Greatest 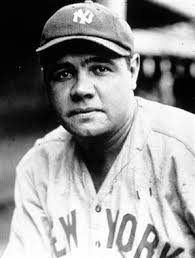 Continuing with my blogs about the business lessons we can learn from Baseball's Greatest players, I will discuss Babe Ruth, perhaps the most famous of them all.

There has never been a baseball player before or since like Babe Ruth, and it's appropriate to start “Lessons Learned from Baseball's Greatest” with him. While modern sports fans might point to players like Michael Jordan, Tiger Woods, Joe Montana, and others who could be considered superstars in the various sports, Babe Ruth was the first. He changed baseball from a summer pastime to the national spectacle, where the star was the man who could slam the ball out of the park. Many of his accomplishments have been surpassed and his records broken, but “The Babe” stands at the head. He is acknowledged the greatest; a truly American success story, an every man who rose from obscurity to greatness and reminds us that, in America, anything is possible.

George Herman Ruth, Jr. was born at the end of winter 1895. Like many children born in the 19th century, he was the son of German-American parents. His birthplace, Pigtown, Maryland, took its name from the thriving livestock market there. Pigs would be herded out of the B&O railroad trains and across the street to be slaughtered and packaged for sale.

His father, George Sr., held many jobs from lightning rod salesman to streetcar operator, but eventually settled as a saloon operator. As a boy, young George Jr. found himself running on the streets much of the time. It was here that his lifelong love of baseball started, playing an improvised version on the streets—streetball. It has also been said that one of the reasons he was listed as “incorrigible” on his school enrollment was the one to many of the neighborhoods’ windowpanes were victims of balls sent sailing from his powerful swing.

Babe Ruth's life changed forever when at the tender age of seven, he was sent to St. Mary's industrial school for boys. These Xaverian brothers who ran the school were strict disciplinarians. The work was hard, and the food was simple. Ruth learned cooking, carpentry, and even shirt making. Indeed, one of the legacies from his time at St. Mary's was his insistence on making his own shirts despite his wealth. Here are some business lessons we can learn from him and his life.

When George Herman Ruth was first introduced to formal baseball at St. Mary's, Brother Matthias, who took him under his wing, and taught him how to play the game, demonstrated to the boys how to hit the ball and hit it hard over the fence outside the field of the school. From that point George Herman Ruth decided that he was going to hit a baseball the way Brother Matthias did. He put in the time and the effort to improve his hitting until he was capable of hitting the ball anywhere he determined he wanted it to go. Do your skills determine where you are going, or do you simply hope for the best?

Babe Ruth began with baseball the way we all do when we learn a new skill: at the beginning. While inside and outside of St. Mary's, Babe spent most of his free time learning to play the game better. Although at the time he only saw playing as an enjoyable hobby, he gave it his all—always playing to the best of his ability. Later, when not playing in the professional leagues, he would often barnstorm; doing exhibition games throughout the country promoting his profession.

Babe Ruth never forgot the lessons he learned from Brother Matthias Boutlier, and later in life as a token of his gratitude sent him a Cadillac as a personal gift, even replacing it when the first was destroyed in an accident. Ruth remained a life-long Catholic, and visited hospitals and orphanages—often unannounced—to cheer up children, as a way to honor those who had helped him in his youth.

During an Elks club banquet in 1922, Ruth was censured by several speakers for his poor performance on the field and on the field. He took the criticisms and emotionally promised to change his ways. When he returned to the field for the 1923 season, He had lost 50 pounds and was in the best shape of his career. Criticism is rarely painless, but when taken well, can lead you to new heights.

Wherever he went, Babe Ruth always had adoring fans, and he always had time for them. From the littlest boy, to the “Joe on the street,” Ruth always took the time to sign a ball, or picture. At the height of his fame, he was still known to have a random stranger come along for a ride to wherever he was going at that time. His ease and showmanship put him within the reach of everyone, making him a household name, and in time an American folk hero; someone whom the nation could rally behind and feel good about when the hard times of the Great Depression came. Are you as accessible to your employees?

When Babe Ruth started playing professional baseball, the game was played by strategy, with hits driving toward the ground within the field, for a single or a double—the so-called “dead ball” era. Putting to use what he had learned from his mentor Brother Matthias, Ruth took ownership of the rare home run—which was already in the rules—and used it to change the very nature of how the game was played. Where teams would see perhaps a dozen home runs in a season, Ruth would hit forty plus alone. Ruth's athleticism, hitting style and sheer power changed a fly ball hit from an easy out for an outfielder to a sporting event: a soaring white orb blasted out of the field beyond the reach of the opposing team, sometimes scoring the team up to four runs from a single hit. This visionary approach also led to a dramatic increase in baseball's popularity with its spectacle and by putting the game within the reach of the spectators, literally. To this day, many fans go to games in the hope of catching a home run ball from their favorite player. To this day, a spectacular success is referred to as “hitting one out of the park.” Is there something seemingly minor that you can use to change the way your game is played?