Avatar - One of the Greatest Movies 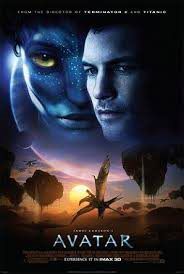 This science fiction film is set in the middle of the 22nd century, a time when Earth is becoming so polluted that is it nearly uninhabitable. On a distant planet named Pandora, a group of humans has set up a technologically advanced camp where scientists, businessmen and marines are working together for what seems to be the same cause: the attainment of a precious mineral called unobtainium. However, as the movie progresses, the different morals and motivations of each group become clear. This conflict of opinions divides the group and ultimately changes the outcome of the war between the human colonizers and the local inhabitants of Pandora.

The story begins with the death of Jake Sully’s twin brother. We learn that it was Jake’s twin who was the true scientist and that Jake has only been offered a spot on Pandora’s scientific research team because his DNA is a perfect match for his brother’s and can therefore biochemically connect with the custom-made Avatar. The Avatars are hybrids of the local race, called the Na’vi, and are controlled by the humans through brainwaves. Jake also happens to be an ex-marine, but is unfortunately a paraplegic. As a result, Dr. Grace Augustine, the chief operator of the Avatar research program does not have very high hopes for Jake’s usefulness. Jake on the other hand, is exhilarated by the capacity of his new body and is a natural at controlling his Avatar. Here are some business lessons we can learn from this movie.

1. Learn how to improvise

Things don’t always go according to plan. While it is very important to have a plan, sometimes you may have to come up with something on the spot. When Jake found himself all alone in a darkening and unfamiliar environment he had to improvise. He made weapons out of the materials around him. While his spear and torch did not end up saving his life, it did attract the attention of a local Na’vi who also changed her plans. Instead of shooting him, she helped him escape from the encroaching beasts. Improvisation can become crucial during business meetings. Maybe some new information is revealed before you get up to present and it affects how you want to portray one of your ideas. Maybe your system is down and you have to find other means to keep the business running and your employees productive. Whatever the situation you must remain calm and collected and adapt to the changes as necessary.

2. Do not be wasteful

The Na’vi people do not believe in killing anything unless there is a very important reason. When Neytiri saves Jake from the night creatures she unfortunately has to take the life of one of them. She is upset with Jake and blames him for wasting life. Jake is a bit bewildered by her accusation; the animal was trying to kill him after all. But, as Jake becomes more familiar with the Na’vi ways he understands how all life in connected. In fact, Dr. Grace discovers that the forest is literally alive and every part of their ecosystem is connected in a neurological way that allows the to store incredible amounts of information. There prudence with their natural resources has led to the creation of something very powerful. When Colonel Quaritch and his army wage war on the ecosystem, they destroy a brand new discovery before they could even realize its significance or usefulness. Be careful not to destroy the possibility of something even more valuable than your initial pursuit. In business we must also use our resources wisely. These can be financial resources or other important components like employees or swag or our product.

3. Recognize that some things happen out of sheer luck

Jake’s situation is indeed fortuitous. It just so happens that as a twin he can be of value to the Avatar project. Because he is of use to science he is able to experience life anew. In the end he is able to gain a new, undamaged, stronger body and live among a people who see him with respect, not as a cripple or inconvenience. All of these occurred for seemingly no reason at all; he just got lucky. No one knows why he was chosen by the Na’vi people to become one of them. In business, sometimes you just get lucky. Circumstances have affected many entrepreneurs’ chances for success. Take Bill Gates for example. He is indeed a very smart man, but he also grew up in the right era, was able to obtain the right education, was connected with the right people. All of these factors gave him the head start he needed to become the CEO of Microsoft. There were probably many other men just as smart as him, but his fortuitous circumstances were enough of an advantage to set him apart from the others.

4. Believe that your dreams can become a reality

Because of Jake’s disability, one of his fondest daydreams wass regaining the use of his legs. In connections with this dream, one of the turning points of the movie is when Jake realizes that the world he inhabits as his Avatar has become more real to him than life in his human body. As his human form sleeps, engaging with the Avatar, he lives in a dreamlike state. Jake continues bonding with the Na’vi people and his desire to remain a part of their society deepens. In the end Jake achieves both of his dreams. His legs are healed metaphorically as he leaves his human form behind to unite permanently with his Avatar body. At first what was simply a dream became a reality. It is this kind of optimism and passion that drives real success. In order for business to grow and become profitable a goal must be born. The goal must be difficult enough that no one has yet achieved it; in other words, it is still a dream. Over time, new ideas can slowly help the dream begin to materialize.

5. Get to the point quickly when using visuals

Though the movie won its awards based on its visual prowess, it is important to know when visual acuity is most important. For example, views greatly appreciate the careful attention to animation detail in creating characters like Neytiri. The extending flying scenes or panoramic views of the landscape of Pandora seemed to only add length to an already long film. When the flora and animal life was visually interesting, sometimes it seemed supercilious, serving no purpose in furthering the plot. When marketing and advertising your service or product it is important to understand what visual details are important to your customer and which ones will result in impatience, boredom or disinterest. These may be different based on your customer base and your product but one thing that is universal in today’s world is that you don’t have much time. Make sure that your advertisements are concise.