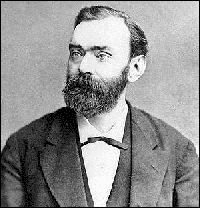 Alfred Nobel had his ups and downs but came out on top through following some lessons that we can all learn from:

1. Mind of an entrepreneur

The Nobel family was involved in many different business ventures from construction, to a grocery store, to the manufacturing of arms and finally to the making of dynamite. They lost much and even went through bankruptcy, but they always seemed to find that which would bring value to an industry. Their entrepreneur mindset led them to become a wealthy family. Entrepreneurship is a mindset. It is, many times, finding value before the rest of the world recognizes it and having the courage to do what is needed to capitalize on it. Are there any areas in your industry that have value that is not common knowledge?

When Alfred Nobel was introduced to nitroglycerine he became fascinated with it, though there was no practical use for it at the time. Being trained in chemistry, Alfred Nobel worked hard to develop ways to make the product have a more controlled detonation (nobelprize.org). After making it more controllable he was able to do very well. A successful entrepreneur recognizes value before others do. They are able to put forth the effort to make their ideas usable. Are there any ideas that could use a little refining that have value?

Nobel became very wealthy through his entrepreneurship skills. He created the Nobel Peace prize for those who excel in areas of science and literature. Business leaders leave their legacy by investing in the community in some way. By serving the community around you your business will have a more positive image. You may also find opportunities to gain valuable business relationships in giving back to the community.

Noble had about 355 patents (Invent.org). The patents he had were in many countries and in several fields. It is clear that he understood the the value of his research and creativity. As business owners and entrepreneurs it is important to realize the value of your research and critical thinking skills. Do you have inventions, unique systems or operational strategies which set you apart? Make the effort to guard these. Creativity and research are not easily replaced. Consider where this valuable knowledge could be lost (employees, the internet, etc.) and take action to assure these risks are managed.

One of the main things that Noble worked on as he perfected dynamite was its safety. He tried many different variations to make sure it was stable. He had lost his brother in an accident. Much time and effort was made to increase the safety of dynamite. Consider the many csosts that can occur due to preventable safety issues both monetary and non-monetary. Overall one of the greatest lessons we can learn from Nobel is risk management. Have you identified all the potential risks that could occur in your business. Do you know the costs that could occur if something unexpected did happen? Are you prepared to deal with the implications should these risk factors actually occur? Are your employees aware of safety procedures?

“If I have a thousand ideas and only one turns out to be good, I am satisfied”

“I intend to leave after my death a large fund for the promotion of the peace idea, but I am skeptical as to its results”