Alexander the Great - One of History's Greatest 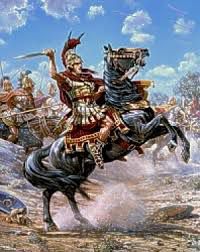 Alexander the Great also known as King of Macedon is one of the most famous men from the ancient world. He was known for his great skills as a leader since he was able to conquer parts of Asia, Persia, and Egypt, making him the conqueror of one of the largest empires of the ancient world. He is also known because he had the privilege of being under the tutelage of Aristotle. He is a great example of a leader because he was very successful commander, and his armies were almost undefeatable. Before he was even thirty he had already conquered the great Persian Empire, and yet he also died in his early thirties.

He was born in July, 356 BC. His father was King Philip II of Macedon, and his mother was princess Olympias. His mother is thought to be a descendant of Achilles and Helen of Troy. Olympias is also believed to have had a great influence in Alexander since he was a little boy. She was of course one of the many wives of Philip, and she wanted to make sure her son would be the one to become king once Philip died. To ensure this she made sure that Alexander had good tutors. Some of the tutors she brought for him taught Alexander to survive in hard conditions, and to even learn to live without the many benefits that a king usually has. Olympias and Alexander always kept a strong relationship, and it is said that they always wrote to each other, even while Alexander was conquering foreign lands.

Alexander the Great is one of the most famous men in the history of the world. His name is a synonym of a great leader. Many of his qualities can be applied to life, especially to the life of those who wish to lead a team or a company to success. He knew that in order to achieve his goals he needed to set an example to his army, and he knew he would also need to be part of all the hard and dangerous work. He was a great example of how to use intelligence, courage and passion to achieve goals. Even since a young age he stayed focused and determined to achieve great things in life. He dedicated all his short life to his goals by getting the education he needed, by improving the great army that his father had already left him, and by working along with his army at all times.

1. Get as Much Education as Possible

Alexander the great had the privilege to be born a prince, which meant he had access to education. He had the great opportunity to be taught by Aristotle subjects like politics, philosophy, and others. He read the Iliad, and people tended to believe he was inspired by it to become such a great military leader. The education he was able to get made him able to make wiser choices, and to have a better knowledge of how to act strategically. Whatever business you own, or you try to start, it is important that you get as much education as possible. The more education you get the more able you will be to make better choices that can bring great benefits to your company. People think and act according to the knowledge they have, and in a world where competition is really hard, you need to be able to have as much tools as possible. If you stay behind in your education, your competitors will always be ahead of you. Even if going to college can be expensive, it will eventually pay off, and you will see this because you will be able to use different techniques to solve any problems your company might run into. You cannot expect your company to succeed by just copying what your competitors do. Going to college does not mean you will receive all the answers for any problems your business will have, but your education will change the way you think, and your perspective of things. You will be able to approach challenges in a different way.

2. Learn to Use Strategy

Alexander the great was an amazing commander. He needed to use strategy in order to be able to conquer so many territories, and in order to expand his empire. It was obvious that he was very successful because he conquered most of the known world of his day. An example of his way of thinking and strategy was the fact that he made his soldiers use large shields and short swords. He wanted their soldiers to be able to be quick with a light weight sword, yet he made sure they were protected by using large shields that could block strong blows. In a way, your team must also be guided by using strategies. The business world is constantly changing, and you have to come up with ways to adapt, and to attack different problems. You cannot expect to win and succeed by using outdated strategies, or things that your competitors are already using. You need to keep your team prepared for different challenges. Once you take the time to plan and come up with different solution strategies, you need to make sure you share them with the people working for you. That way everyone will be united, working in accomplishing the same thing. Great leaders like Alexander are always devising new ways to conquer a market.

One great thing that made Alexander a wonderful leader is that he led by example. His soldiers trusted him because they knew that he would only ask them to do things that he was willing to do himself. A great leader is able to inspire respect and trustworthiness, and this is usually achieved by giving a good example of what you expect of people working with you. This is very important if you want to become a business leader; you will need to set an example to your team first, before you are able to demand great things from them. Usually, when people admire someone, they try to emulate them. They want to achieve the same type of success so they try to imitate as many qualities as possible. A great leader who expects the best from his team is always giving an example of what he expects from others. Respect is not something easy to get, but you need to start by being aware of what your actions inspire others to do.

Alexander would not have been able to accomplish so much, and to conquer so much territory had he not made sure he had a united and strong team. Alexander also trusted his soldiers to save him from difficult situations. Likewise, you need to be able to trust the people who work for you. A strong team who is trying to reach the same goal, and whose members are able to trust each other are more successful. The people who work with you will be with you during the highs, and hopefully also during the lows. A leader cannot be in charge of everything, so he or she needs to be able to trust someone with some responsibilities. He or she also needs to know that their team will follow the goals set even when the leader is not around. A strong team usually is the result of a lot of communication and honesty.

Alexander knew how to plan ahead of time. Before going into a battle he spent time planning different moves his soldiers could do, as well as possible moves that his opponent could make. That way he was prepared for almost anything that could happen. He loved surprising his enemies, but he took great precautions so that he and his team were not taken by surprise. This is also a very useful skill in business. Before launching any new product, it is important to do the appropriate planning. You need to make sure you will be prepared for the time your product launches; you also need to make sure the marketing strategy is the right one. You need to know your clients, and you also need to know the current trends, and the way your opponents are competing against you. Good leaders try to be prepared for any surprises they might encounter, and they also try to plan carefully so they are ahead of their competitors.