Albert Schweitzer - One of History's Greatest 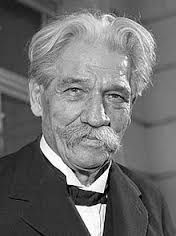 Albert Schweitzer was known for his work in education, music, philosophy, religion, and other fields. He was raised in a family very devoted to religion, art and education. His father was a protestant minister, and many of his relatives were academics. Schweitzer was born in Germany on January 14, 1875, but he later obtained a French citizenship. He was raised speaking an Alsatian dialect. He is probably best known for earning a Nobel Prize in 1952 in philosophy for his essay entitled “Reverence for Life.”

Albert was raised Lutheran, which is one of the reasons why he was interested in music since an early age. His father taught him music, since it was something useful for church. He learned to play the organ since he was young. His grandfather was actually an organist too, so the passion for music had been in the family for a while. In high school he expanded his knowledge of music, and he started playing music from composers like Wagner and Bach. He was also taught different languages like Latin and Greek. Although he did not consider himself the best of students, he said he learned to become a good one by learning different studying techniques. In college he studied theology; he was always interested in the life of Jesus. He also got a doctorate in philosophy from the University of Strasbourg. There, he was encouraged to do research on his own, and to come to his own conclusion on different theological and philosophical subjects. He loved that type of freedom, and he spent his time studying essays from people like Immanuel Kant, Nietzsche, and other important thinkers. He also met Ernest Munch who helped him a lot with his passion for music; he would allow him to play from time to time at the St. Wilhelm’s Church. He also went to different music teachers who helped him develop different skills that helped him with the mastering of the piano and organ.

Albert Schweitzer was one of the greatest minds of the 20th century. His contributions in music, philosophy, theology, and philanthropy were many. His passion for all those fields never died, and he was always looking to develop new ideas that could not only enter the academic conversation, but that could also help in improving the lives of others. He was a person conscious of how a person’s life could be of great influence in the lives of others, so he made sure that his life was an influence for the good. He was also a man with great determination, and once he realized what he needed to do to accomplish his goals he worked hard to make them happen. His life can be a great example and inspiration not only for people who want to make a contribution in education and philanthropy, but also for those who want to accomplish success in any type of field.

Ethics were really important for Albert. He spent a big part of his life teaching people about religion, about having principles, and about being kind to others. It seems that one of his philosophies about ethics is based around life; the idea that life is something that all of us as human beings have in common with one another. He taught a lot about the value of life and about the importance of not only not causing pain to others, but also the importance of making an effort to improve the lives of others. Not damaging others people’s lives is not enough, it is important to think of ways to help others. A lot of people think that in order to move up in life they need to step on others, or prevent the progress of their colleagues or coworkers. However, this is not true; when people who work together help each other, the work environment will be more prone to bring progress to the company as a whole. As a business leader you will need to choose to apply good ethics not only inside the company, but also when you make deals with other companies, with clients, investors, etc. A good ethics code in your company will encourage everyone to move forward as a team. Great leaders think about others, and they try to come up with products that will improve the lives of others.

Albert Schweitzer said, “Compassion, in which all ethics must take root, can only attain its full breadth and depth if it embraces all living creatures and does not limit itself to mankind.” He was a man devoted to the service of God, and to teach people about the great wonders that God created. Having compassion is something that goes with having good ethics. It is not only important to act compassionately towards other humans, but also to have respect for nature. If you own a business you have probably already run into situations where you have to decide whether to worry about the environment. Showing respect for nature and for the limited resources that this planet provides is also important. A good leader is aware of his surroundings, and is not wasteful of resources. Compassion towards all living creatures can not only help you save money for your business, but also make sure that your community is a place where the environment is being taken care of for future generations.

3. Learn the Real Value of a Company

Albert Schweitzer believed that the value of a thing is expressed in what it adds to the lives of others, and lived by this principle. For example, he decided to leave his more comfortable house in Europe to go live in Africa for a while so he could help as a medical missionary. He was of value not because he had so much knowledge about music, religion, and other subjects, but because he took the time to improve the lives of others. He worried about others, and he tried to improve the lives of people in Africa helping them achieve better health. According to this philosophy, your value will be based on the positive change you make in the lives of your customers. The actual benefits they receive are the evidence of your business value. Of course you want and need to make a profit. A successful business is able to sustain itself, and to provide a good profit for the owner. However, it is also important that one of your main focuses is to provide a service or a product that will actually help people in their lives. It does not have to be something that changes their lives dramatically, but at least something that helps them in some way.

4. Learn to Focus on a Purpose

Schweitzer chose to go to medical school because he wanted to give medical care to needy populations in Africa. He and his wife moved to Africa where they built a hospital and provided medical care to the population for several years. The hospital continued to grow through the years. He first had a goal and a purpose, and then he made a plan that will help him accomplish that. Businesses also need to be founded with a purpose in mind. You cannot start a business or a company only because you want to make money, you also need to think of the purpose of your company. Once you decide your main purpose, you can start planning different ways to accomplish that. It is also important that your employees know the main purpose of the company, that way everyone will be working towards the same goal. It is also a good idea to remind people of the goals of the company every once in a while. You can also choose to reconsider your goals, and adapt them to the time and situation of your company. However, you choose to do it, it is important that there are goals to set. Projects without a purpose are usually not finished, or have a short life.

Albert knew there was a need for medical care to the area of Africa he went to serve. He was certain that his services would be needed there before he actually got there. Even before the hospital was built, he already had a lot of work to do with the people of that area. When deciding to open a new business you also need to consider the demands of the place where you live. If you already know what type of product or service you want to offer, you need to make sure that there is a demand for that product in the place where you live. Your business will not have many chances to succeed if there is not a demand for your product. Unless you know you are going to be able to transport it to the places where that product is needed, and of course as long as you can actually make a profit after transportation expenses. If you are flexible about where to live, you can always do research and figure out which place will be better to move in and start your business. If you do not know yet what type of company you want to own, you can find out what type of services are needed in your community so you can provide that service for the population living in your area. It is extremely risky to try to open a business without doing any proper research on the market place, and on the type of clients you will most likely have.