Aladdin - One of the Greatest Movies 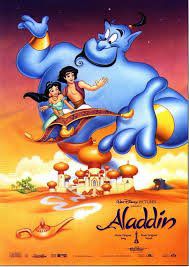 This classic Disney movie is based on the Arab folktale about a poor boy named Aladdin found in the collection entitled One Thousand and One Nights. The film follows the story of Jafar, Grand Vizier to the Sultan, and his plans to overthrow the sultan and claim the throne for himself. Paralleled with this plot line is the story of the street rat Aladdin. The fates of these two characters intertwine when Jafar learns that Aladdin is the “diamond in the rough,” the only one who can enter the cave of wonders.

The movie opens with an overeager merchant trying to sell the audience cheap merchandise. Most of it breaks and each time he begins another sales pitch the camera angle moves sideways as showing that his audience is no longer interested in listening to him. In a desperate attempt to keep our attention he offers to tell us a wondrous tale. It begins with Jafar’s first and unsuccessful attempt to obtain the lamp. He has paid a lowly thief to bring him the other half of a golden token that unlocks the entrance to the cave. Jafar commands this man to enter the cave and bring him the lamp, promising the man the rest of the cave’s treasures in return for his service. We are then introduced to Aladdin as he puts on a crafty display of street smarts. He manages to escape the authorities that are after him for stealing and winds up with a couple of loaves of bread. Aladdin, a kind man, offers his hard-won bread to a pair children who are foraging in the garbage. We also learn that Aladdin is mesmerized by the idea of a sumptuous life; he prides his hideout - mostly its captivating view of the grand palace.

1. Don’t just talk to your customer

Make sure you engage in a conversation. The merchants in Aladdin just keep on offering customers different products and the result is two negative reactions. The first is boredom as seen in the drifting camera angles representing the audience’s attention to the cheap salesman in the beginning. The second reaction is one in which your customer becomes so overwhelmed with the number of choices offered that they fail to purchase anything. This I what happens to Jasmine her first time in the marketplace.

2. Don’t be someone you are not

Sometimes we get caught up in the management styles or corporate ideals that are popular or seem to be statistically proven. In the end, one is most successful and achieves what they want by being true to themselves. It was Aladdin’s selflessness and realization that he needed to stop being someone he was not, that ultimately won the heart of the princess and the respect of the Sultan, enough so that laws were changed.

3. Do something that will make money

While it is important to do something that you love, Aladdin shows the reality of poverty and the struggle life can be without the material necessities. In the end Aladdin does get the riches and he is happy to be able to live a life of luxury. His happily-ever-after does come with wealth and prosperity. All of the worries that plagued his life while he lived on the streets are gone. Yes he got the girl, but he also got all the means to keep her and their future family happy, safe and full of promise.

This is most apparent through the character of Jafar who relentlessly tries to steal from everyone through deceit. He fails twice to obtain the lamp and ultimately ends up in his own lamp instead. Even Aladdin, who does initially gain the lamp, fails to physically steal it back from Jafar. Instead he relies on wit to trick the evil sorcerer into bondage. Finally, in the end when Aladdin has again regained the lamp, he refuses to steal the power of the genie and sets him free instead. The light of the lamp goes out and everyone gets what they want based upon their own merit rather than by stealing from or relying upon others.

While it is obvious that the Sultan was often under the control of Jafar and unable to act or think for himself, there is a key moment in the movie that reveals the true weakness of the Sultan’s character. After Jafar has gained the throne, he commands that Jasmine and her father bow to him. The (former) Sultan, though he has seen the wickedness and treachery of Jafar, immediately begins to bow. Jasmine on the other hand doesn’t hesitate to speak her mind, loudly declaring that she will not bow to Jafar. The Sultan had the misfortune of unknowingly employing a bad advisor. But, even when he is awakened to this knowledge, he refuses to try and fight against it. In your workplace you should do your best to hire honest people, but don’t be afraid to put a stop to any misbehavior as soon as it comes to your attention. Letting things slide will weaken your resolve and you will lose all authority, even the ability to control your own actions willingly.

6. Understand the rules before you go about being too generous

7. Don’t be afraid of change

In the creative production of Aladdin, many things underwent revision and change. One of the most dramatic examples is the character of Aladdin himself. The filmmakers were open to change and understood that sometimes your hard work must to cast into the fire so something better can be born. It can be hard to move in a different direction or “start over” after hours or even years of work on something. But sometimes one little change can be the difference between success and failure. Ultimately the rework will get you where you want to be, while remaining on an unproductive path will only lead to a dead end and wasted time and energy. Unfortunately, we sometimes have to spend a long time on what feels like a wasted journey before the real road becomes clear.